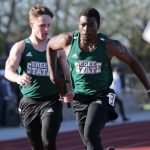 Free State senior Malachi Starr is not a fan of losing.

So it was business as usual when the FSHS sprinter took home the gold in the 400-meter run with a time of 50.43 at Free State’s regional meet last week. It earned him a trip to the state track meet in an individual event, though he will also be competing in a pair of relay races.

Starr is the anchor on the 4×100-meter relay and 4×400-meter relay, and he has every intention of crossing the finish line first in at least one of those three events at at Wichita State’s Cessna Stadium this weekend.

“I just want to win,” Starr said. “I’m not nervous at all. I’m just ready to run and rock and roll. I just really want to get a gold medal.”

Both Free State relay teams took second at the regional meet to punch their ticket to the state track meet.

The 4×100-meter relay team of Cole Phillips, Ja’Brandion Douglas, Tyler Bowden and Starr are seeded fifth among state qualifiers in Class 6A. Preliminaries are slated to take place at 3:15 p.m. Friday.

Starr is also the last leg of the 4×400-meter relay unit, which includes Bowden, Phillips and Jack Keathley-Helms. That quartet is the sixth seed, with preliminaries scheduled to take place at 6:25 p.m. Friday. Starr was on the 4×400-meter relay team that finished sixth at state two years ago.

In his lone individual event, Starr is the sixth seed with a time of 50.43. The top seed in the Class 6A boys 400-meter run is Leavenworth’s Guo Ramos, who ran a regional mark of 48.79.

“He’s been beating me,” Starr said. “I won regional meet and the meet before that. The other two meets, I have faced Guo and lost. So I’m trying to beat him at state this week.”

Haley Hippe on a mission

Before the start of the season, Free State junior Haley Hippe would have never imagined she would be going to the state track meet in the discus competition.

For one, this is her first year competing in the sport at the high school level. She also thought she was better at javelin at the beginning of this year. After improving all spring, Hippe launched a throw of 109-05 to take second at the regional meet and earn a trip to the state meet.

“I’ve worked a lot,” Hippe said. “Just working on my spin and the different techniques within the spin. It has helped me throw it father, which is the point.”

But Hippe is not content with just going to the state meet.

Hippe might be seeded 12th based on regional marks in the 6A girls discus competition, but she knows she is capable of exceeding expectations. Hippe is within striking distance of earning a trip to the podium, which is reserved for the athletes in the top-eight of each event. Blue Valley’s Meghan Lemons is seeded eighth in the discus competition with a regional-throw of 114-0.

Mostly, Hippe wants to prove that her hard work was worth it. Hippe also competes in volleyball in the fall and girls basketball in the winter. This is a chance to show that she made the right choice for her spring sport, and her commitment to track was worth it.

An area athlete or relay team is the favorite based off regional marks in a total of seven events this weekend.

Free State junior Auna Childress boasted the best regional leap in triple jump with a 40-6. She also has the best mark in the event in Class 6A girls in 2019, recording a school-record leap of 40-9 at the Kansas Relays on April 19.

Tonganoxie’s Cole Sample launched a throw of 61-10.5 at regionals, which is the best throw in Class 4A boys shot put this season. Matt Jackson of Baldwin ran a time of 22.15 to win the 200-meter run at his regional meet. That mark is the fastest 200 time in Class 4A boys this spring.

Bishop Seabury junior Henry Nelson will actually get things started this weekend, and could claim the first hardware for an area athlete. The Class 2A boys 3,200-meter run will begin at 8:05 a.m. Friday morning, and Nelson has the best regional time entering the event.