State golf suspended due to rain 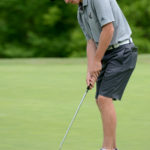 Free State High's Landon Berquist watches his putt during the 6A state golf tournament Monday, May 21, 2018, at Ironhorse Golf Course in Leawood.

In Class 6A, a trio of Free State golfers were in the top-31 on the individual leaderboard before the delay at the Sand Creek Station Golf Course in Newton. Play was supposed to be resumed Wednesday, but that has since been pushed back. No day or time has been announced.

FSHS senior Landon Berquist was in 15th place through six holes, shooting a +2 on the day. Berquist, who has qualified all four years of his Free State career, placed 11th at the state tournament last spring. This season, Berquist has posted an average round score of 76.6.

Senior Dylan Sommer is in a tie for 22nd place at +2 as well. Junior William Gard is in 31st at +3 for the Firebirds. Ross Brungardt, who is the lone Lawrence High golfer at the state tournament, is shooting a +5 through six holes. He’s in 54th place on the individual leaderboard during his second trip to the state tournament.

The Class 2A state tournament, which is taking place at Hesston Golf Course, was also suspended due to weather. Play will resume at 11 a.m. Wednesday. Bishop Seabury freshman Will Hedges is in ninth place at +2 through five holes. Hedges has won two meets already in his freshman campaign.