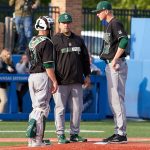 Both city programs garnered plenty of All-Sunflower honors, which was released Monday afternoon.

Bradford and junior Camden Karlin were the only two Firebirds to make the first team, and both did as pitchers. Senior second baseman Garrett Romero, sophomore outfielder Devin Neal and senior closer Hank Dobson were all named to the first team for the Lions.

Free State junior David Stuart was tabbed with a second-team selection. Sophomore shortstop Carlos Vasquez and senior pitcher Jake Miller made it to the second team for Lawrence High.

In addition, four city athletes were named to the All-Class 6A first team and one was listed on the second team. Bradford earned Pitcher of the Year honors, which was voted on by the Kansas Association of Baseball Coaches. Karlin also joined Bradford on the first team as a pitcher.

Dobson and Romero were recognized with first-team honors. Neal netted a second-team selection.