‘We really did it’: Lawrence High girls swim wins state title for first time since 1994 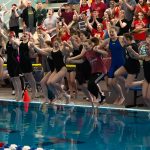 TOPEKA — It wasn’t until Lawrence High senior Emily Guo raised her head above water that she realized what had just happened.

Guo, who was the final leg of the 400 freestyle relay, looked toward her teammates after touching the wall on the final race of the 6A state meet Saturday afternoon at the Capitol Federal Natatorium at Hummer Sports Complex in Topeka.

Guo saw seniors Morgan Jones and Jamie Abernathy hugging with sophomore Madi Heckman, and that is when she knew — Lawrence High’s girls swim team had won the 6A state title.

“I was trying hard to not think much and I definitely didn’t comprehend that we had won when I touched,” Guo said. “Seeing everyone start crying, I was like, ‘Oh, we really did it.’

LHS finished with 303 points to claim the top spot in the team standings, notching the program’s first state title since 1994. Shawnee Mission East came in second with 283 points, while Wichita East took third with 267 points. Free State, meanwhile, placed 12th out of 23 teams with 79 points.

Afterward, the Lions took part in the usual postgame festivities to celebrate their monumental win. They posed for photos with the championship plaque atop the podium in front of jubilant LHS crowd. Lawrence performed a celebratory jump in the pool when announced as the state champions.

Yet Kent McDonald, who was named the Coach of the Year at the state meet, forgot an important thing when leaping in the pool with the rest of his team.

“It was funny that my coach left his shoes on,” Jones said. “He’s meant everything. He’s everyone’s favorite person on the planet. He believes in all of us, and it is huge to have someone that believes in you that much. There is no other coach I’d rather win state for.” 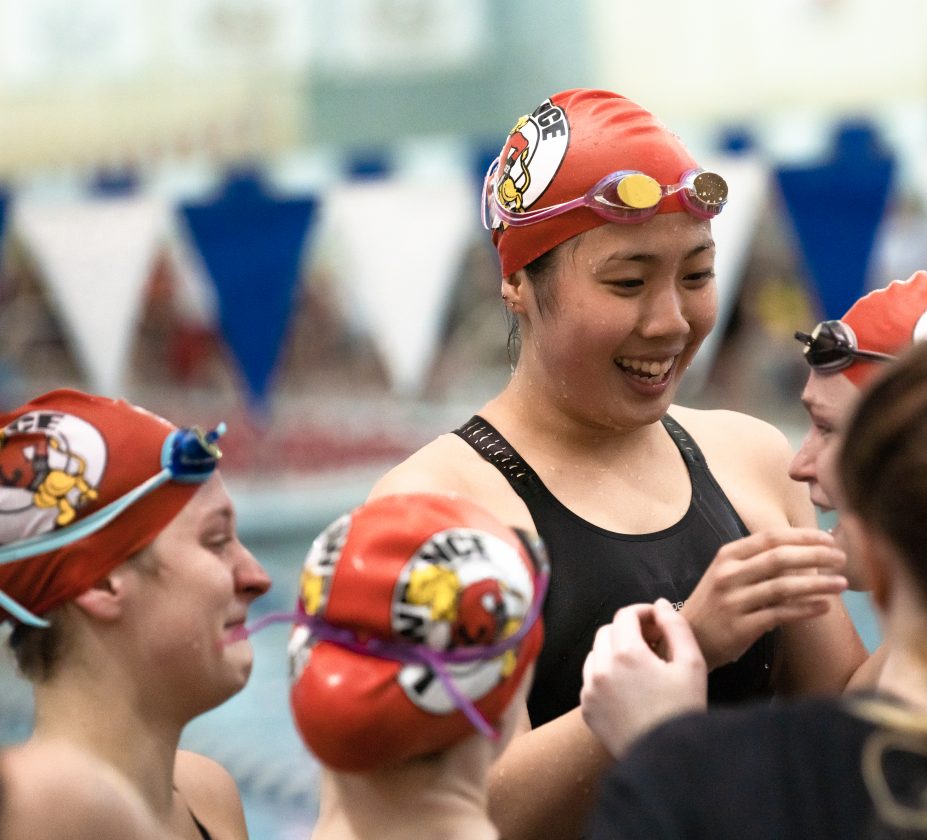 LHS senior Emily Guo smiling with teammates as they won the state title during the 6A state swim meet at Capitol Federal Natatorium.

To McDonald’s credit, though, this marked his first state title in his 13 years at the helm. But it was a scene that he actually envisioned over a year ago. In fact, McDonald believe this group could get it done when Lawrence finished second at the Sunflower League meet last spring.

“This was our year to do it,” McDonald said. “Last year, we finished second at league and Sunflower League is the toughest swimming league in the state. We didn’t lose anybody and we got some new freshmen that contributed and helped.”

This time around, the Lions were in first from the beginning thanks to a balanced effort. Senior Eden Kingery kicked things off with a seventh-place finish in the diving competition, which was one spot higher than last year’s state meet.

The 200-medley relay quartet of senior Maddie Dean, junior Marian Frick, sophomore Aubrey Fischer and Guo then began the racing events with a runner-up finish. Jones followed that up with a sixth-place finish in the 200 freestyle.

Guo (third) and Dean (sixth) then both medaled in the 200 IM. Heckman claimed fourth in the 50 free, while Guo (fourth) and Fischer (seventh) both earned podium finishes in the 100 butterfly. At that point, there was a brief delay due to weather that paused action.

The Lions continued to pile up medals in the second half of the meet, however, following the delay. Heckman notched seventh in the 100 free, while Abernathy recorded a personal-best time to take 11th.

“I thought it might bother them,” McDonald said of the delay. “They were already nervous. But (Abernathy) ran her best time and it didn’t seem to bother them at all.”

In a season of sheer dominance, the Lions won 72 events en route to nine first-place finishes in as many meets during the regular season. Lawrence won another five events in the Sunflower League meet.

But it took a collective effort on Saturday to accomplish what hadn’t been done in 25 years. LHS did not have an individual state champion, but managed to score points in every single event to claim a team title.

“It is pretty crazy,” Jones said. “I wouldn’t want to end my senior year any different.”

It was a different feel for Free State’s girls swim and dive team this season.

Last year, the Firebirds were a state contender and focused on getting as many points as possible before finishing as a runner-up. This season, individuals shined for the Firebirds in the final meet of the spring.

As a team, Free State tied for 12th with Olathe Northwest. But it was a promising showing for a team that has aspirations of contending again in the near future.

“For Payton (Krug) and I, it was just try to place as high as I can,” Free State junior Kasey Dunn said. “Even if you do bad, just know that next year is another chance to do better.”

Free State’s Kasey Dunn competes during the 6A state swim meet at Capitol Federal Natatorium on Saturday, May 18, 2019.

Free State’s Payton Krug was pleased with how her sophomore campaign finished out.

For the second year in a row, Krug finished fourth in the 100 breaststroke. She also notched a medal in the 200 IM, claiming fifth after finishing fourth in that event last year. Still, Krug took solace in the fact her times were dropped in both events.

“I went best times in both of my events,” Krug said. “I definitely didn’t have a good club season, so coming into high school I was just like, ‘Let’s see what can happen’. At league, I was really shocked what I went. So I just wanted to come in here to race and have fun.”

Dunn was the only other Firebird to find the podium Saturday, and she did so twice as well. Last spring, Dunn finished eighth in both the 100 fly and 200 free. This time around, Dunn took seventh in the 200 free and eighth in the 100 free.

“I’m happy with my races and how I performed overall,” Dunn said. “I did switch events, so I’m glad with how I placed.”