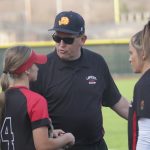 Nobody wants to kick off the postseason by facing the defending champions.

After a 3-17 campaign, though, the Lawrence High softball team knew it was going to get a tough test in the regional opener. At the very least, the Lions will be all-too familiar with their first-round opponent when they travel across town to take on Free State at 4:30 p.m. Thursday.

LHS dropped both meetings with FSHS this season, though there is a lot more at stake for the third installment of the City Showdown.

“That’s tough competition, obviously,” junior shortstop Karly Johnson said. “Now we are basing our practices around Free State and what they do. What their tendencies are and things like that. I think we have a couple of things that will change the game for us.”

The Firebirds, who won a state title for the first time in program history last spring, claimed two convincing wins in their first two meetings with the Lions.

Free State (18-2) recorded a 12-0 victory over Lawrence at LHS on April 12. FSHS then took care of business at home with a 13-0 win on May 1. Although both outings ended in lopsided shutouts, the Lions are optimistic with how they played for a few innings in the first meeting.

Senior pitcher Angelina Harjo kept her team within two runs in the first three innings and relied on strong defense from Johnson. FSHS eventually broke the game open with four runs in the top of the fourth.

“Honestly, it was like a whole different team,” Johnson said. “We all wanted to win and were eager to be out there. I think going into postseason, it doesn’t matter what happened before.”

Johnson, who missed most of her sophomore season with a broken jaw, has anchored a strong Lawrence defense for much of the year. She’s consistently provided production at the plate as well.

“It’s just been fun watching her,” first-year coach Steve Seratte said. “She’s made some phenomenal plays. We have got run-ruled our fair share of times this year. It would have been a lot worse had she not made some of the plays that she has. She’s kept us in games.”

Even though the regular season featured a number of lopsided defeats, Seratte encouraged his team to have a different attitude heading into the postseason.

Lawrence, the 15th seed in the 6A West, seemingly has nothing to lose when it takes on No. 2 Free State in the regional opener. The winner of the crosstown clash will face the winner of No. 7 Haysville-Campus (14-6) and No. 10 Wichita East (5-11) at 6 p.m. for a spot in the Class 6A state tournament.

“We talked this week about how this is the second season,” Seratte said. “All you have to do is win two ball games. Look at Free State last year, they were the eighth seed going into the tournament and they won their regional.”

For the first time in the Brad Stoll era, the Lawrence High baseball team will host a regional.

“I think we are really excited for this week,” senior Payton Cummins said. “Unlike the last few years, we all truly believe we are going to make it to the state tournament. We just have had so much success this year and surprised a lot of people. I think we have always known that we have this in us.”

The Lions played 12 games at LHS in the regular season, including one contest during the River City Festival. Lawrence went 10-2 in its ballpark this year, which featured an 11-1 clobbering of Blue Valley West.

It goes further than that, too. Lawrence has been in 10 one-run games this season, but has a distinct run differential in home contests. LHS has scored 48 total runs at home this year, while holding its opponents to a combined 12 runs.

“I’m really confident with this team,” senior Caleb Mondi said. “I know we lost last week to Free State, but that game didn’t even matter. It is already in the past. We are just ready to go out and win our first regional on our home field.”

Firebirds not overlooking anybody

As the No. 1 ranked team in Class 6A, Free State’s baseball team has its eyes set on playing next week.

But FSHS, the No. 2 seed in the 6A West bracket with a 17-3 record, is not about to overlook anyone. Not even No. 15 Hutchinson, which needed to win a play-in game, to set up a first-round meeting at 2 p.m. Thursday at Free State.

After all, Hutchinson played two close games with Haysville-Campus, the No. 1 seed in 6A West, nearly two weeks ago.

“They have five left-handed hitters in the lineup,” FSHS coach Mike Hill said. “We are going to have our hands full. At this time of the year, it really comes down to matchups. People look at records, but the record you have to look at is what is your record with the guy you have on the mound.”

Fortunately for the Firebirds, they have a few different talented hurlers to turn to this postseason.

Senior Ethan Bradford, a Nebraska signee, has tossed 49 total innings and allowed four earned runs off 19 total hits. Bradford (6-1) has struck out 64 batters and walked 22 to go along with a .571 ERA.

Junior Camden Karlin has a 4-1 record with an 1.094 ERA in nine games. He’s struck out 29 batters and walked one over 32 combined innings. Junior David Stuart has a 4-1 record to go along with his 1.892 ERA. He has racked up 29 strikeouts and seven walks over a total of 37 innings of work.

“It starts with good defense and good pitching,” senior first baseman Jake Baker said. “Our bats will come around and we will make plays.”