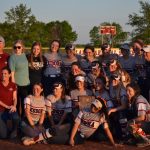 “She came up and said, ‘Hey buddy, you got it,'” Etter said. “It really helps with my confidence and helps knowing that everything is going to be OK. My team is believing in me and I need to believe in myself.”

Etter obliged. She got Tonganoxie junior Destiny Dishman to swing through a 1-2 pitch, which punctuated a 15-0 victory by Eudora’s softball team Tuesday night at EHS. The Cardinals needed just 2 1/2 innings to complete the run-rule victory, which advanced them to the Class 4A state tournament.

After the unleashing a strike, Etter spun in a complete circle in the air. She flung her glove into the sky and met the rest of her EHS teammates for a dogpile in the middle of the infield. It was a fitting celebration for a team that notched its first state berth since 2016.

But it was actually poetic, at least the moment between Kennedy and Etter just before the final play of the game. The two had a similar conversation in the regional championship in 2016, which also took place against THS of all teams.

“We did the same thing freshman year, I was playing third and she was pitching,” Kennedy said. “Right before the last batter, I said it was (her) girl and her pitch. We just kind of got that mojo.”

The Cardinals have their mojo back with Etter, who missed a few weeks with an injury, returning to the circle. It gives the offense confidence, and that was never more evident than in the regional title game.

After an 1-0 victory over Iola in the regional opener, the bats came alive for EHS when a state berth was on the line. Eudora scored five runs within the first 14 pitches in the bottom of the first, forcing Tonganoxie to make a change in the circle. 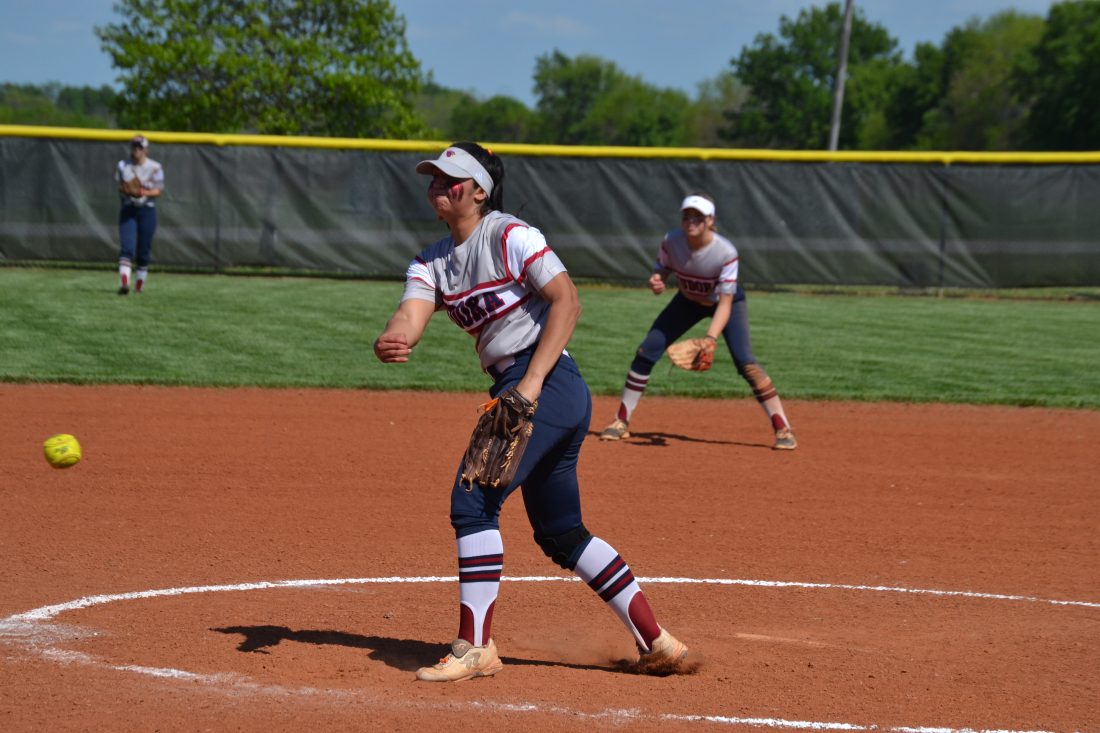 Eudora senior Kyla Etter fires a pitch in the seventh inning of an 1-0 win over Iola in the regional opener Tuesday, May 14, 2019, at EHS. Etter pitched all three innings of the regional championship against Tonganoxie.

Junior Lydia Brown began things off with a walk and freshman Harper Schreiner notched a base hit one batter later. Junior Sierra Smith scored both runners with a two-run single. Etter followed suit with an RBI double off the wall in center. Seniors Grace Lovett and Holland Harvat then each came through with an RBI single.

“I was not expecting that,” Etter said. “We hit way better than we did the first game. This game, we adjusted to every single pitch.”

The floodgates opened from there, as the Cardinals proceeded to score 10 runs off eight hits in the first inning. They added five runs off four hits in the second. For Eudora, it was a satisfying way to avenge last year’s loss to Tonganoxie in the regional championship game.

“That one last year hurt and this one feels pretty good,” EHS head coach Bill Finucane said. “I didn’t expect that kind of scoring, but always happy to have it. We told our girls that looked like our team, so that was wonderful.”

Still, it was surprising outcome given the way the regional semifinals went earlier that day.

Fourth-seeded Eudora (15-5) avoided an upset against No. 13 Iola (6-10) with a perfect blend of good defense and timely hitting. Kennedy reached base in the bottom of the sixth with a bunt single, and she eventually advanced to third base by swiping two bags. Lovett drove in the game’s only run with an RBI single.

Freshman pitcher Sadie Walker tossed six shutout innings before allowing Etter to close things out in the seventh. Walker was benefited by strong defense as well. Schreiner, who was playing in center, kept Iola off the board with a perfect throw to home plate in the top of the fourth.

No. 5 Tonganoxie, meanwhile, won a back-and-forth battle with No. 12 Baldwin (7-11) by an 8-4 margin in the other regional contest. The Chieftains (13-6) scored six runs over the final two frames, erasing an early 3-2 deficit to take down the defending state champions.

“We have had Tonganoxie in so many regionals in the past, so it just feels like revenge,” Kennedy said. “We knew they were a good team and they hadn’t lost since we played them the first time. We just came out firing, and it was good.”

The Class 4A state tournament will take place at Bill Burke Complex in Salina next week.