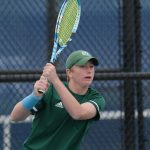 Free State's Sawyer Nickel volleys a ball in a match against Shawnee Mission West's Abhirup Mukerje at the 6A State Tournament, May 11, 2019 at the College Boulevard Tennis Complex.

OLATHE — Free State senior Sawyer Nickel couldn’t help but feel frustration as he found himself in a 3-0 deficit in what he knew was going to be his last high school tennis match.

But instead of letting his anger undermine his performance, Nickel found a way to relax and have fun.

Nickel rallied back to win 9-6 against Shawnee Mission East’s Blake Eason and placed seventh during the second day of the 6A state tournament Saturday afternoon at the College Boulevard Tennis Complex.

Less than 24 hours earlier, Nickel fell out of the main draw with a loss to Olathe West’s Brett Seaton (6-3, 6-2), the eventual state runner-up, in the quarterfinals. Nickel fell to Shawnee Mission East’s Jake Louiselle (9-4) in his second match of the day on Saturday to miss out on a chance at fifth place.

“I’m just glad I ended on a win,” Nickel said. “Obviously, I would have hoped for a better result but I’m happy with how I played.”

A four-time state qualifier, Nickel placed at state for the third year in a row and for the second time in singles. He improved on a ninth place finish in 2018, and he also took fifth place his sophomore year as part of Free State’s doubles tandem.

Nickel, a Northwest Missouri State signee, finished his season with a record of 22-9 with a 4-2 clip in the state tournament.

“I just know that where I am at right now, I’ve still got to put a lot of work in this summer to be more confident in what I can do,” Nickel said. “I am just hoping to contribute to the team next year.”

Of the Firebirds’ state qualifiers, all placed inside the top 10. 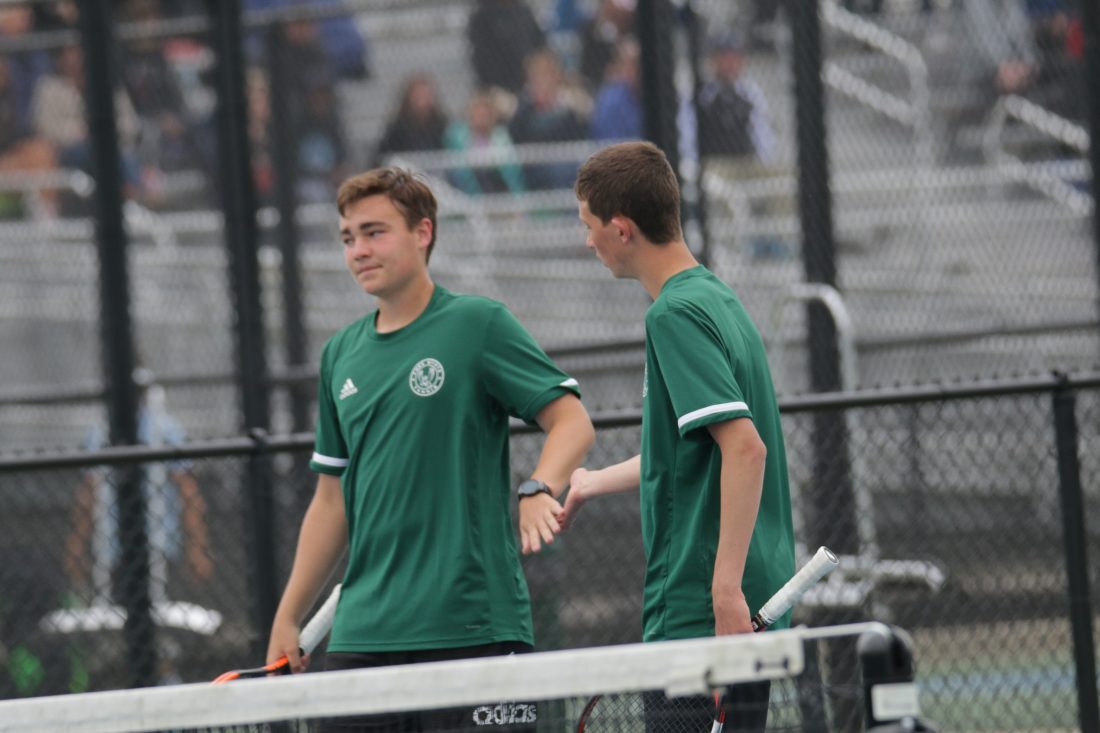 Free State’s Davis Steadman and Trey Melvin celebrate a point against Manhattan at the 6A State Tournament, May 11, 2019 at the College Boulevard Tennis Complex.

Free State’s senior doubles team of Trey Melvin and Davis Steadman made its way into day two after going 3-1 on Friday and falling out of the main draw with a three-set loss to Blue Valley Northwest’s Brent Fallon and Alex Mojica.

Melvin and Steadman picked up a win to start the day over Manhattan’s Jack Easton and Jerin Ugrin (9-5), but fell to Olathe West’s Lucas Dryer and Carter Lichtsinn (9-2) and then to Mill Valley’s Alex Hoffman and Colin Shanker in the seventh place match.

Fallon and Mojica would go on to earn the state title three matches after surviving a tiebreaker with Melvin and Steadman.

“I think we had a little bit higher expectations,” Steadman said. “Last year I didn’t even qualify, and thanks to Trey I was able to make it all the way to day two.”

Free State finished sixth as a team with 17 points.

After taking the No. 6 seed, Lawrence High did not have its team of senior Cooper Wright and junior Kanak Masten advance to the second day of action.

Wright and Masten opened up the tournament with a first round win over Hutchinson’s Evan Henderson and Harrison Pankratz (6-0, 6-0), and then fell to Blue Valley West’s Dylan Yan and Delvin Ko (6-1, 6-4), who were the eventual state runner-ups. After a win over Derby’s pair (9-3), they were eliminated with a tightly-contested 9-7 loss to Topeka’s Banks Whitney and Marcus Rodriguez.

Wright and Masten finished the season with a record of 22-10 after going 2-2 on the weekend.

Bishop Seabury finished the second day of 3-2-1A state tournament at Harmon Park on Saturday with a medal in No. 1 singles after qualifying five athletes.

Grayson Rader rallied back from a second round tiebreaker loss to Cole Deutschendorf of Heston (3-6, 6-1 (10-8)), winning his next two matches on the backside of the bracket. Rader went on to place 11th individually after going 4-3 on the weekend.

Peter Westbrook took the fifth seed but lost both of his matches on Friday. Ian Hanna and Diego Klish went 2-2 on the day, picking up wins over Wichita Classical (6-1, 6-0), and then Larned (9-3) in the first round of the consolation bracket.

Rader scored 7 points for Seabury en route to an 11th place finish as a team.

Friday and Saturday at the College Boulevard Tennis Complex

Friday and Saturday at Harmon Park