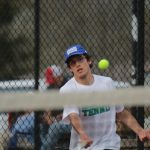 Seabury junior Grayson Rader returns a ball in a match on April 9, 2019 at Lawrence High School.

Two years ago, Rader qualified as part of a doubles team along with a senior at the time. The duo went 1-2 at the Class 3-2-1A boys tennis state tournament before exiting, but it marked the first time that Seabury qualified players for the state tournament since 2014.

Rader is now headed to his third consecutive state tourney, including his second-straight appearance as a singles player. And he has every intention of building on his eight-place finish from last year.

“Our best chance at getting anyone from my school to state was me and a senior who had hardly played at all,” Rader said. “We got to state, we didn’t place, but it was good and we actually overperformed. Sophomore year, I underperformed. This year, I’m very excited.”

But that’s just one example of how much the Bishop Seabury boys tennis program has changed in three years with Christy Ward at the helm.

“It’s really exciting how fast our tennis program has grown,” Rader said. “This is the second sport we have had that has a ‘B’ team. It is really exciting. People have put in a lot of hours and I’m proud of them.”

For the second consecutive season, BSA is sending four players to the final meet of the spring after claiming runner-up at the regional meet last weekend. It is a credit to the work the program has put in, which includes many hours in the summer devoted to improving their craft.

“It is a lot progress and they have really worked hard year-round,” Ward said. “They have come a long way. To be a good tennis player, you have to put a lot of time in.”

The No. 1 doubles team, for example, worked together over the summer to ease the transition to sharing the court together for the first time. Junior Ian Hanna and freshman Diego Klish have posted a 15-6 record this season, which included a third-place finish at the regional meet.

Hanna qualified with a different doubles partner last year, though he complements Klish’s strengths really well. Hanna is the power hitter at the net, while Klish has been solid along the baseline.

“It is a good dynamic,” Hanna said. “We have definitely gotten closer and grown as a doubles team.”

Sophomore Peter Westbrook, who is 14-6 entering his second trip to the state tournament, is coming off a fifth-place finish at regionals. Westbrook hopes to finish in the top-12 this season after losing in the first round last year.

“It was definitely a learning experience,” Westbrook said. “I’m familiar with the format and everything. I have a better sense of what to expect. This season, I’m coming in with a higher seed and I think that experience is going to help me.”

No Seahawk has as much experience as the team’s No. 1 singles player, however. Rader is 14-5 in his junior campaign, as he notched third in the singles bracket at regionals. He’s got the speed to compete with anyone in his field this weekend.

“I’m hoping we stay focused on the things that we can control,” Ward said. “We let everything else happen.”

The All-Sunflower League girls swim teams had plenty of local presence on it.

Julia Larkin inked her plans to run cross-country and track at Kansas State. Larkin is one of five Firebird girls to medal at state in each of her four years with the program. Cole Phillips (Pratt Community College) and Will Byers (Baker University) also signed to compete in track at the next level.