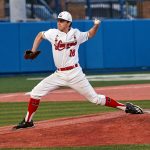 When Lawrence High baseball coach Brad Stoll and pitching coach Adam Green sat down ahead of the season to map out the Lions’ potential lineups, they were worried about the LHS pitching staff, just because they thought it may be too thin.

As they looked at potential starting pitchers, senior left-hander Hank Dobson may have been an obvious choice, but Green suggested going another direction.

“Hank is a calm, cool kind of dude,” Green pointed out to Stoll at the time. “If we have a chance, let’s see how he works out as a closer.”

It turned out to be a perfect fit. Dobson enters the final week of the regular season with 5 saves to his credit, plus a 1-0 mark, thanks to his spotless ERA. In 13 innings of work Dobson has allowed no runs, given up zero walks and struck out 10 batters.

“We’ve had a lot of one-run ball games and we’ve had him in some situations late and it’s just been a really nice role for him, because it really just matches his personality,” Stoll said. “You’ve got to have a guy with a short memory, and you’ve got to have a guy that’s really calm and cool. And that fits his MO perfectly.”

Payton Cummins, a longtime friend of Dobson and an LHS outfielder, said his buddy may be known for his serious demeanor on the diamond, but Dobson is usually joking, doing some kind of impression with his voice or making inside jokes when they are hanging out on a weekend.

Dobson agreed that his onfield persona differs from his everyday life.

“I mean, I’d like to say I’m like that with everything,” Dobson said of Stoll praising him for being so cool and calm. “But I think it really comes out in baseball. The pressure hasn’t really gotten to me too much. I just stay level.”

In a season full of examples of Dobson’s composure, Stoll said one in particular stuck out to him. It came in one of the Lions’ 10 one-run games. It was on the opening night of the River City Festival and Dobson got a hitter to bury a swinging bunt into the turf at Hoglund Ballpark, on the University of Kansas campus.

None of those mistakes were on display as Dobson made it all look so simple.

“He just kind of strolled coolly off the mound, picked up the ball and threw a strike. And it ended up not being a bang-bang play, but it should’ve been,” Stoll said of the defensive play. “He just kept his cool. It’s kind of how he does everything. He’s just a cool kid. That’s what I’ve always noticed and appreciated about him.”

As impressive as his pitching statistics look, Dobson said there have been stressful moments along the way. Just this past week, against Park Hill, Dobson said he had to collect himself — it was a game LHS won 4-0 to improve to 14-5 on the season.

“I didn’t have my best stuff. My curveball wasn’t working as well,” Dobson said. “I just had to take a deep breath, step off the mound, know all my guys have my back and just toe the rubber and go.”

A mutual confidence exists between the LHS closer and his teammates. And it came about before this year.

When Cummins learned that Dobson would be taking on the closing role, he liked it in large part because that meant the lefty would be manning first base even more without spending as many innings on the mound.

How good is Dobson at first? Stoll didn’t hesitate to call him “the best defensive first baseman” he has coached at LHS.

“We’ve had some good ones. But he just has an innate ability to dig the ball,” Stoll said. “We had a couple plays the other night where guys made nice plays and they hurried a throw across the diamond. It’s just when you see it skip, you don’t even worry about it anymore. Hank just stays right on the ball. He gets his eyes down low and just plays right through it. It’s kind of a natural play for him.”

As if that wasn’t enough, Dobson, who is hitting .339 with 10 RBI entering Thursday’s City Showdown with rival Free State High, also delivered one of Lawrence’s signature offensive moments so far this season, with a walkoff single to defeat Blue Valley North.

“Nothing really changes,” Dobson said of his mental approach when he’s at the plate, compared to when he’s on the mound. “Just play my hardest and do something to help the team win. That’s really what I try to do.”

With LHS down a run to BVN, Stoll said Dobson was someone the coaches and players trusted to deliver.