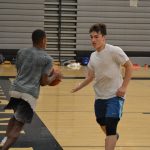 In just one year, things are a lot different for Free State’s boys basketball team.

Entering last season, the Firebirds were facing a massive roster turnover that involved promoting several players from the junior varsity team. This year, though, Free State brings back a ton of experience from a team that went to the Class 6A state tournament.

And the difference was evident during the team’s summer basketball camp in early June.

“We got a lot of guys that have now played in the state tournament, played in the Sunflower League and gone on trips like McPherson,” FSHS head coach Sam Stroh said. “I think our experience as a whole is going to pay off.”

Point guard Mozae Downing is back after running the offense throughout his freshman campaign last year. DK Middleton figures to be a go-to option during his senior season this winter.

Ethan Lincoln, Alyus Wisdom, Wyatt Durland, Andrew Piper, Olin Yoder and Dash Cleveland are also back after logging varsity minutes last year. Miles Branch, who transferred from Bishop Seabury, is one of the key newcomers for the varsity team as well.

That depth will be essential in the regular season, particularly during Sunflower League play. FSHS finished fourth in the league standings last year after claiming back-to-back league titles the previous two seasons.

“We can play up to 9-10 guys, compared to last year when we played seven,” Middleton said. “It is going to save people’s bodies, especially in tournaments. If we make it to state, it will help.”

The improved depth has been a luxury during games in the summer, but it was especially beneficial during scrimmages in camp as well.

“Competition breeds success,” Stroh said. “We can only put five out there. The more depth we have the better, and hopefully it pushes the other guys to improve.”

Free State also could have a better shooting team this year.

Last season, the Firebirds were often involved in low-scoring contests. They leaned on their defense, and attacked the rim on the offensive end. This summer, however, shots from the outside have fallen at a higher rate for Free State.

With players another year older, and new players coming in, FSHS has hopes of being able to shoot the ball better on a consistent basis this year.

“We are going to play fast a lot this year,” Lincoln said. “We want to hit a lot of transition threes. That is where basketball is headed these days. We have a lot of shooters, and that is going to help us.”

Even with an inexperienced group this time last year, Free State eventually made it to the Class 6A state tournament for the third season in a row. The Firebirds (15-7) were ultimately eliminated by top-seeded Washburn Rural in the opening round.

But Free State has every intention of getting back to Wichita for the 2019-20 season.

“That’s the goal all the time,” Lincoln said. “Our talent last year was playing together, and I think that is our same talent. (It will take) everyone giving 100% and being all in.”