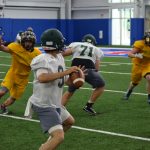 When he wasn’t on the field, it wasn’t hard to spot Free State’s soon-to-be senior Colter Maldonado.

Throughout the two-day Kansas football camp in early June, Maldonado was constantly playing catch with a teammate when the Firebirds were not scrimmaging. For Maldonado, it was an opportunity to improve even when he wasn’t facing one of many talented teams that took part in the camp in Lawrence.

“I believe I need as many reps as possible right now, to learn the playbook,” Maldonado said. “We are all doing that, it is not just me. We are all getting many reps.”

It is especially important for Maldonado, who appears to be the favorite to be Free State’s starting quarterback in 2019.

Maldonado saw a bulk of the reps during the two full days of camp, which featured several teams and a lot of scrimmaging. Maldonado made a number of plays as the FSHS signal caller, even though he was learning a whole new system under first-year head coach Kevin Stewart.

“We are trying to put in routes, but then he also has to make reads,” Stewart said. “We have teams that are blitzing at us already. We haven’t even made our read progression. Yeah, it makes it hard.”

To top it off, Maldonado only had two days of practice leading up to the camp. He missed the other two days due to a baseball tournament. Still, Stewart was impressed with what Maldonado was able to do against different defenses.

“I told him that he looked pretty good for having two days of practice in a brand-new offense and not knowing who to read and who to look at,” Stewart said. “He’s definitely a competitor.”

However, Maldonado is not new to Free State nor being a varsity quarterback.

Maldonado played quarterback for FSHS as a freshman before switching to receiver as a sophomore. He then moved back to quarterback last fall, when he transferred to Coronado High School in Coronado, California. He also played cornerback during his lone season with the Islanders.

In his first season as a signal caller at the varsity level, Maldonado completed 51-of-124 passes for 867 yards and eight touchdowns in 10 games. He also ran for 547 yards and seven scores on 115 attempts.

“He’s one of my best friends, so it is really exciting for him to come back and watch him grow and play better at quarterback,” Free State’s Turner Corcoran said. “He gets better every day.”

Maldonado came back to Free State for the spring semester, as he played shortstop for a team that finished as a runner-up in the Class 6A state tournament. Maldonado will now have one last year on the gridiron and baseball diamond for the Firebirds.

On the football side, Maldonado will have plenty of talent around him. Free State has posted back-to-back double-digit win seasons, and this year’s squad appears to be strong. Marcus Preston transferred back to Free State from Mill Valley and will be Maldonado’s go-to receiver.

Running back Tyler Bowden caught a bunch of passes out of the backfield during the two-day camp. Corcoran, a Nebraska commit, will anchor a new-look offensive line at left tackle. It is up to Maldonado to have faith in the talented players around him.

“Coming here, I feel a little more comfortable back there,” Maldonado said. “(I just need to) trust my offense. Trust my line, because they have my back. Trust my receivers, throw the ball and they will make plays.”