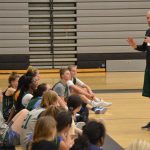 Free State head coach Nick Wood speaks to his squad during the team's summer camp Thursday morning at FSHS on May 30, 2019.

Wood asked the three players on defense, including Harrell, what they did wrong. The players answered immediately, admitting the lack of communication during that particular sequence. And that was the theme of the team’s first camp with Wood at the helm.

During a camp in May, Wood stressed the importance of communicating on both ends of the floor.

“He’s really big on energy, and I think that is good for us,” Free State’s Shannon Clarke said. “A quiet gym is a losing gym. He’s starting us early with the energy, so that at the beginning of the season it will become natural.”

It is not that the Firebirds struggled in that area before, but Clarke admitted that they didn’t consistently bring the energy throughout the season.

The energy was easier to bring during a stretch in which Free State went 5-1 across a six-game span in February, including a win over Lawrence High. It was more difficult to see during a four-game skid in the first half of the season.

But that is why Wood, who previously was an assistant for the Washburn men’s basketball team, is emphasizing it early in the offseason.

“That was one of the first things we talked about on the very first day,” Wood said. “I said, ‘Girls, let’s be in here and support each other. Let’s pick each other up. Energy level has to be high. Because if it is not, then we won’t be as good as we need to be.'”

Wood, who also served as the head girls basketball coach at Lawrence High between 2009-14, knows he has the talent to have a competitive team in his first year.

Clarke, a junior, is one of four key returners from last year’s squad that went 10-11 before falling to Garden City in the first round of the 6A west playoffs. Point guard Caely Kesten and Haley Hippe will lead the team as seniors. Harrell was a dynamic defender during her sophomore campaign last season.

The experience was evident during summer camp, which helped ease the transition for Wood. In fact, Hippe didn’t even meet Wood until the first day of camp after competing for the track team this past spring.

“He seems like a great coach, he’s very energetic,” Hippe said. “I think we need to work on our energy and communication. Starting out, nobody really knows each other besides the upperclassmen. We need to work on coming together as a team.”

If the Firebirds can accomplish that, there is no telling what they are capable of this season.

“It can make a great difference,” Hippe said. “You have to have a great team bond to have a good team on the court.”