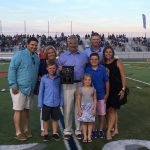 Former Lawrence High coach Dirk Wedd gathers with his family during the hall of fame ceremony of the Greater Kansas City Football Coaches Association All-Star Game on Thursday at the College Boulevard Activity Center in Olathe.

A trademark of so many Bob Lisher-coached Free State High football teams were the hard-hitting defenses.

Those who attended the Greater Kansas City Football Coaches Association All-Star Game on Thursday at the College Boulevard Activity Center got to see some of those bone-jarring hits firsthand, along with getting a glimpse of the all-around talent in the Lawrence area.

Free State alumnus and Baker freshman Shane Skwarlo gave the Kansas All-Stars their first lead of the game after recovering a fumble in the end zone for a touchdown, and they never looked back as they upended the Missouri All-Stars, 35-21.

“That big special teams touchdown and then the defensive touchdown picked our offense up and gave us that momentum for the second half,” Skwarlo, who recorded 1.5 tackles, said. “We just ran with it for the rest of the game.”

Skwarlo and fellow former Firebirds Matt Georgie, Jalen Nash, LJ Mack and Kameron Lake were joined by Lawrence High products EJ Jewsome and Eric Galbreath and the ex-Baldwin High standouts Cy Hockey and Zach Flowers in helping the Kansas All-Stars to their second straight victory over the Missouri All-Stars. The Kansas All-Stars found themselves in a 14-0 hole before scoring 21 unanswered points in the final 2:02 of the half.

Along with putting on his Free State helmet one last time, Skwarlo was honored to play one more game for Lisher, who was inducted into the GKCFCA Hall of Fame at halftime. 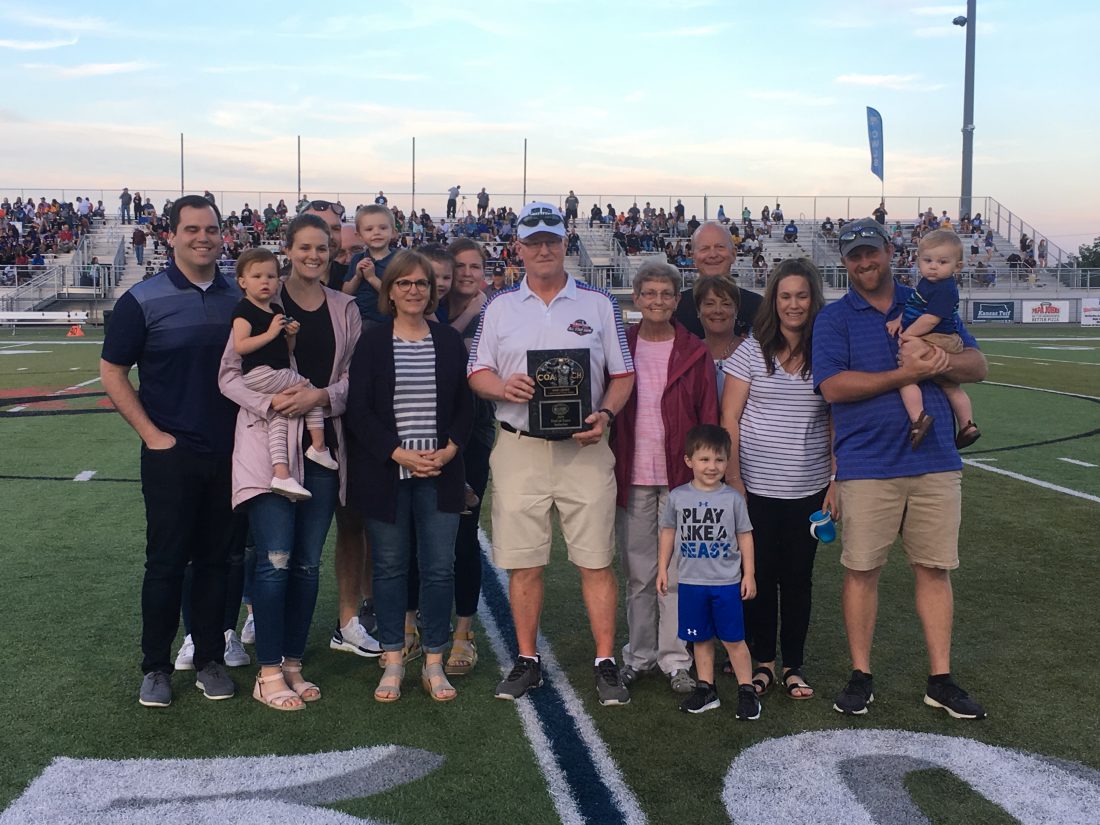 Jewsome and Galbreath also had the opportunity to catch up with one of their former coaches. Former Lawrence High coach Dirk Wedd joined Lisher as part of the nine-member hall of fame class.

“I’m so happy for him. He’s one of my favorite coaches that I’ve ever had,” Jewsome said. “Words can’t describe my love for that man.”

The last play of the game was particularly special for Jewsome. He recorded a sack after Galbreath put the initial pressure on the quarterback.

All nine Lawrence area players will continue their football careers at the collegiate level in the Sunflower State. Flowers, Hockey, Nash and Skwarlo will play for former Lawrence High and Kansas standout Jason Thoren at Baker. Mack will also play in the Heart of America Athletic Conference as he heads to MidAmerica Nazarene. Georgie (Pittsburg State University), Lake (Washburn), and Galbreath (Emporia State) will cross paths in the MIAA, while Jewsome will start his collegiate career at Butler County.

“Getting that early bond on the field, it’s really special,” said Skwarlo about becoming close with his Baker teammates. “I’m moving forward now and looking forward to the future.