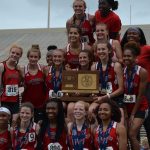 Lawrence High's girls track team won the Class 6A state title for the second year in a row. The Lions finished 22 points higher than any other team after the three-day state track meet at Wichita State's Cessna Stadium Sunday afternoon on May 26, 2019.

It was a special season for the Lawrence High athletic programs, especially on the girls side.

The LHS girls track team defended its crown, winning the 6A state title on one of the last days of the 2018-19 sports season. Two other programs, meanwhile, returned to its former glory with title-winning seasons. LHS volleyball won its first state crown since 1995, while the girls swim team won every meet en route its first state title since 1994.

John Hilton got a good seat for all of these monumental runs during his first year as Lawrence High’s athletic director. Hilton provided plenty of insight from the latest season for the Lions.

“We have great coaches and great kids. This senior class was special,” Hilton said. “When I took over, and I talked to (former athletic director) Bill DeWitt, he told me that was one of the things he focused on, trying to get our girls athletic programs back.”

Lawrence High’s third state title of 2019 stood apart from the other two because the athletes and coaches expected it from the very first day.

After winning the 6A girls track title last season behind a talented group of juniors, the Lions team felt confident they could defend their crown with the bulk of their production coming back. LHS finished 22 points higher than any other team in the state meet, which lasted three days due to multiple rain delays.

Lawrence’s only setback was the final meet of the regular season, in which the team finished third by the narrowest of margins. The Lions responded by winning the Sunflower League meet as well as the regional meet before their convincing performance at Wichita State’s Cessna Stadium. 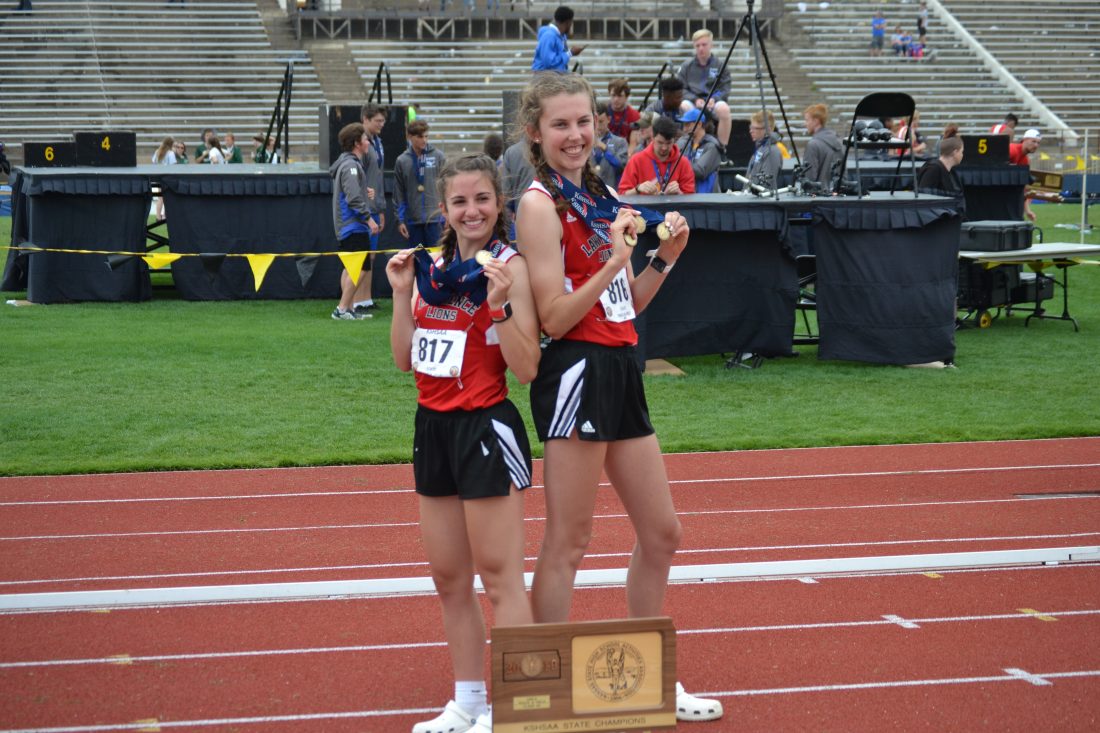 LHS took 15 total trips to the podium for placing in events. Hannah Stewart and Evann Seratte earned a medal in all four of their events during their last showing with LHS.

“Those girls believed they were going to win it from the first day that I talked to some of them,” Hilton said. “I think a lot of that has to do with the great senior leadership of this class and coach (Jack) Hood putting kids in the right places to get those points.”

After a fourth-place finish at state last year, Lawrence’s girls swim team won all 11 of its meets in 2019.

The Lions won 72 events en route to nine first-place finishes in as many meets during the regular season. Lawrence then won another five events in the Sunflower League meet to secure a team title. 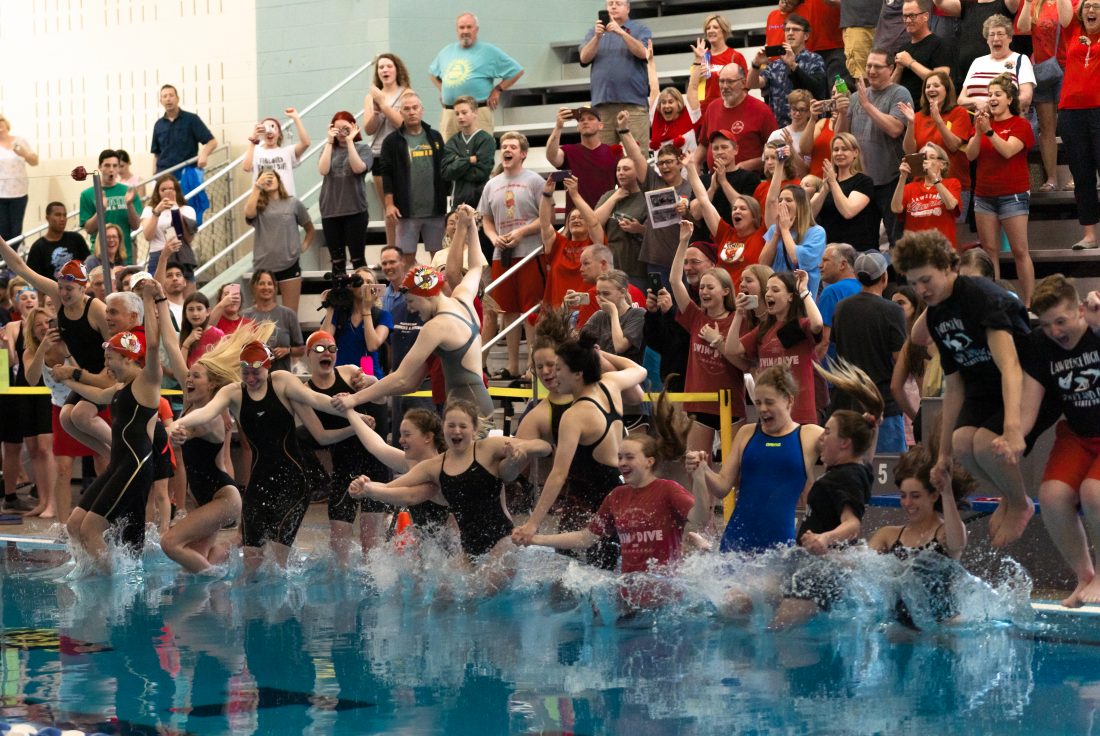 LHS did not win a single event during the state swim meet, but still managed to best the runner-up by 20 points. Kent McDonald was named the Class 6A Coach of the Year after guiding the program to its first state crown since 1994.

“Coach McDonald is so low-key with everything. But when I talked to him at the beginning of the season about the girls, he thought he had something special,” Hilton said. “That was pretty cool. It was a group of girls that not a whole lot of people outside of coach McDonald and the girls had that expectation.”

LHS volleyball got things started by rolling to a state title in the fall sports season.

The Lions dropped just nine of their 90 total sets en route to their first state title since 1995. The three-set win over Blue Valley in the state championship match secured the team’s 16th state title in program history.

Head coach Stephanie Scarbrough was actually a player during the team’s last state title. Prior to the season, she elected to put all nine seniors on her varsity roster and lean on them throughout the year. 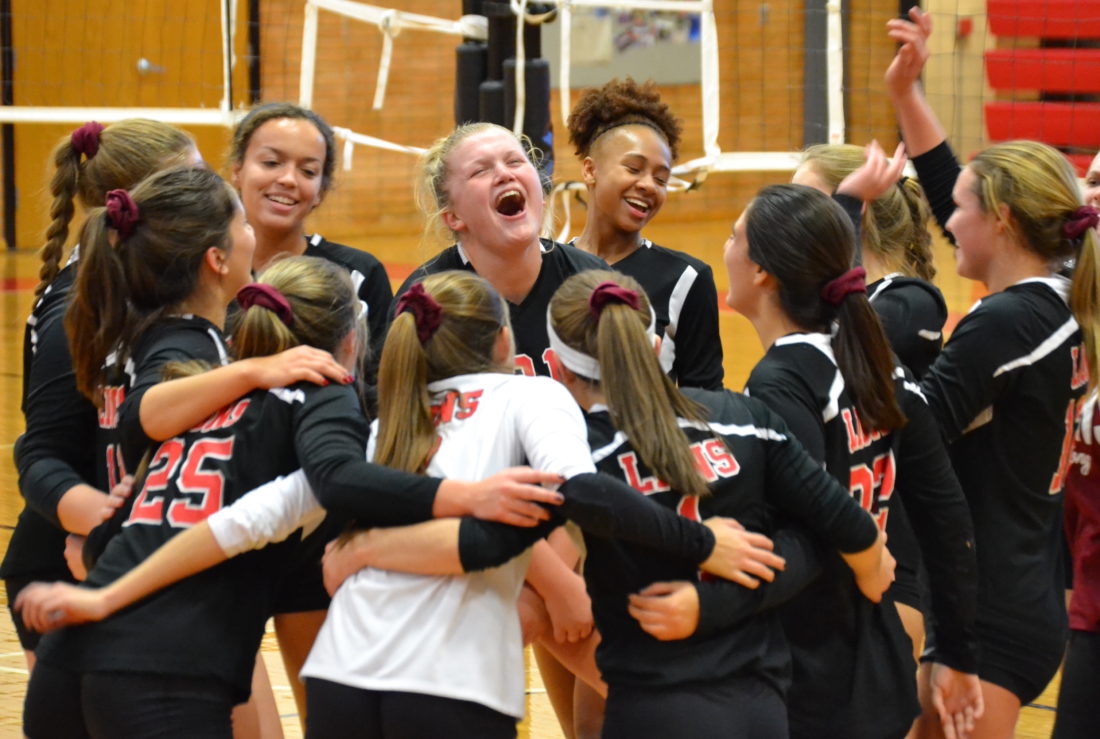 The Lawrence High volleyball team celebrates after defeating Wichita Southeast in the substate championship on Saturday, Oct. 20, 2018, at LHS. The Lions are headed to the 6A state tournament for the second straight season.

The three title-winning squads weren’t the only programs to have success this past year, however.

In the fall, Lawrence’s gymnastics team secured a state runner-up plaque to improve on a fifth-place finish from the season before. Josie Hickerson won the vault competition, finishing fifth overall in the all-around rankings.

The boys basketball team was electric all year, winning three different titles before eventually being eliminated in the opening round of the Class 6A state tournament. The Lions (19-4) secured titles at both the Blue Valley Shootout and Topeka Invitational Tournament, while also winning an outright Sunflower League title. They still notched their fifth consecutive trip to the state tournament.

“Everybody always talks about Lawrence High and all the championships that they have won,” Hilton said. “Until you have been in the environment and the culture with the coaches, the kids and the community itself, you really don’t understand it. It was something that was really special.”