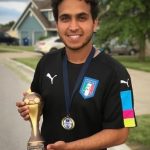 Hussam Mohammed will be the head coach for both boys and girls soccer at Free State High School.

Hussam Mohammed wasn’t sure what to expect when he applied to be the new Free State soccer coach.

Mohammed, who has been playing the sport for as long as he can remember, has been coaching since graduating from Wichita State with a mechanical engineering degree three years ago. He’s served on the Sporting Kaw Valley staff and was turned down for an assistant position at Lawrence High last year.

But Mohammed was determined to be a soccer coach, so he threw his name in the mix when the FSHS position opened up. One week after a successful interview, Mohammed was offered the position to be the head coach for both boys and girls soccer for the Firebirds.

“I’m so happy to get the job, I didn’t expect to get it that quick,” Mohammed said. “I can’t wait to see where we can go with the team.”

For Mohammed, it is an opportunity to start meeting his players to see what he has to work with.

“What I’m focusing on is to get to know my players and their ability,” Mohammed said. “Once I have that figured out, I will see what we need to work on as a team.”

Mohammed and has been playing soccer since he was 4-years-old. He played for his elementary, middle school and high school teams in Jeddah, Saudi Arabia. He eventually played right winger at both Emporia State and Wichita State.

The transition to coaching was a seamless one. He coached U8 to middle school-aged kids — both boys and girls — for Sporting Kaw Valley. Mohammed’s mindset remains the same, and his teams tend to dictate the tempo. Under Mohammed, the Firebirds should be aggressive on both ends of the field.

Both Free State soccer teams finished below .500 and were eliminated during regionals this past year under Kelly Barah.

Mohammed hopes to improve both records, though he knows that will take a collective effort.