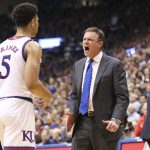 Kansas head coach Bill Self rips into Kansas guard Quentin Grimes (5) during the second half, Monday, Feb. 25, 2019 at Allen Fieldhouse.

It may not have been Quentin Grimes’ initial plan, but he’s choosing to make the most of his current situation.

The one-time 5-star prospect has had a wild 12-plus months since joining the Kansas basketball program. At first, the expectation was for Grimes to play one season with the Jayhawks before eventually becoming a likely lottery pick in the 2019 NBA Draft. That didn’t happen.

Grimes did start all 36 games for the Jayhawks during his freshman season in 2018-19, but never seemed to meet expectations. He averaged 8.4 points, 2.5 rebounds and 2.0 assists in 27.4 minutes per game last year.

Still, Grimes chose to enter the NBA Draft even though his stock had plummeted. Grimes eventually pulled his name out of the pool on May 29, though he immediately announced that he would be transferring. It wasn’t until late June that Grimes revealed his next stop, as he chose to continue his playing career at the University of Houston.

To say it was an unusual path for Grimes would be an understatement. This past weekend, Grimes sat down with NCAA.com correspondent Andy Katz to go over his crazy summer in an interview that was posted via Twitter on July 20.

When asked what led to transferring from KU, it was clear that it was an easy decision for Grimes.

“I feel like Kansas was a good, OK, alright season for me,” Grimes said. “I just feel like it wasn’t a good situation all in all. I feel like I just kind of had to get a new start, go to a different setting (and) different environment.”

Perhaps Houston is the perfect situation for Grimes to thrive then. The UH campus is roughly an hour away from Grimes’ home in The Woodlands, Texas. The Cougars have had success, winning the American Athletic Conference with a 16-2 record a season ago before falling in the Sweet 16 to Kentucky in the Midwest region.

Grimes initially wanted to play right away, but his waiver request was ultimately denied. As a result, Grimes plans to make improvements while sitting out for the 2019-20 campaign.

“Coming here, I get to work on my game,” Grimes said. “I get to tighten everything up, so that when I do get to play, when I am ready, that I will definitely be able to jump in there and go back to that old Quentin that everybody is used to seeing.”

But Grimes doesn’t want to just get back to the way things used to be. In fact, Grimes told Katz that he believes he can hit a different gear when he returns to the court for the 2020-21 season.

“I feel like my game would have taken off to a different level, honestly,” Grimes said. “I feel like having all that responsibility on my shoulders is definitely going to push me and lead me to a different direction, just unlock something I didn’t know I had in me. I feel like a year from now, I will probably be a totally different person on and off the court.”

"They embraced me right away when I came on my visit. @CoachSampsonUH is building something great here in this city."