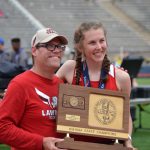 The U.S. Track & Field and Cross Country Coaches Association (USTFCCCA) announced the state-by-state winners of its High School Coaches of the Year award for track & field. On the girls track side, Hood was named the Kansas Coach of the Year for what his team accomplished this past spring.

Hood guided the Lions to their second consecutive state title, as they scored 22 points more than the runner-up. It marked the first time there has been a back-to-back champion in 6A girls since Free State did so in 2013 and 2014.

As a team, Lawrence took 15 total trips to the podium for placing in events throughout the three-day meet. The state title completed a postseason sweep for LHS, which won the Sunflower League meet and regional meet as well.

In addition, the winners from each state are in consideration for the association’s National High School Track & Field Coach of the Year award. One boys coach and one girls coach will be selected by a panel of experts and those winners will be announced later this month.