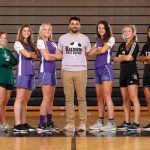 Chieu poured in a school-record 19 goals to lead the Sunflower League in scoring during her senior season. Chieu scored five goals, including a game-winning goal in overtime, against Free State. She also scored five goals in a win over Gardner-Edgerton in a variety of ways. Chieu delivered the game-winning score with 20 seconds left in overtime at Pembroke Hill.

It was a phenomenal season for the Baldwin girls soccer team. The Bulldogs won their first-ever Frontier League title after winning all seven of their matches against league foes. They only gave up three scores during that span. BHS finished with a 12-2-1 record, allowing only 13 scores all year.

Anna Burnett, Baldwin — As the year went on, Burnett had to get more creative to find the back of the net due to the lack of good scoring opportunities. Burnett finished with a team-record 27 goals to go along with eight assists in her junior campaign. Burnett was involved in over half of Baldwin’s 47 goals on the season.

Josie Boyle, Baldwin — Anchored Baldwin’s defense, which allowed fewer than one goal per game. Boyle, a junior centerback, played 79+ minutes per game for the Bulldogs and was an integral part of Baldwin’s success. Boyle even competed in track in the spring, qualifying for state in two different events.

Caitlin Countryman, Baldwin — Switching to more of a facilitator role this year, Countryman was crucial to the prolific year for the Bulldogs. Countryman led Baldwin in assists for the fourth year in a row, setting a school record in assists during a season with 13. Countryman also scored five goals this spring.

Emily Heinz, Bishop Seabury — Despite playing only 10 matches, Heinz scored 23 goals and recorded six assists in her junior campaign. It was no easy feat given the fact Bishop Seabury was decimated by injuries and often had to play shorthanded. Heinz also had to deal with opposing teams focusing on her, and still managed to score six goals in a single match.

Kate Erpelding, Eudora — A big reason why Eudora improved on its 2-13-2 record this past spring was the play of Erpelding. The sophomore often played up top for the Cardinals, finishing in a tie for first in goals with 10. Erpelding also led EHS in assists with seven and was the team’s best overall defender.

Alex Pascua, Eudora — Serving as Eudora’s main focus of attack, Pascua punched in a team-high 10 goals to go along with four assists. The sophomore midfielder mostly played wide for the Cardinals, but moved up top near the end of the season. Pascua demonstrated prolific cross passes, which set EHS up for a lot of scoring chances.

Emma Yackley, Free State — The Creighton signee served as a co-captain for FSHS this spring. Yackley was named to the first team in the Sunflower League as a midfielder, and showed the ability to score in bunches as well.

Brittany Hoffman, Free State — As the other co-captain, Hoffman’s leadership was essential during an underwhelming season for Free State. Hoffman, a senior, earned a second-team selection by the league coaches as a defender.

Leslie Ostronic, Lawrence — The best on-ball defender Lawrence had to offer this spring. Ostronic, a senior, was often tasked with stalling the best scoring threat. For her play, Ostronic was named to the All-Sunflower League team as a defender.

Anna Soetaert, Tonganoxie — Most of Tonganoxie’s scoring chances were created by Soetaert. The senior forward finished with eight goals and four assists, which earned her a second-team selection in the Frontier League.