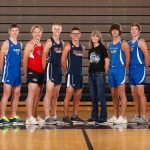 Winning a state title in Quinlan’s senior season was always the goal. After a runner-up finish last year, Quinlan won the Class 3A boys 400-meter run with a school-record time of 49.52. He was also a regional champion and league champion in the event. Quinlan was the first leg on a 4×400-meter relay team that took second at the state meet.

For the second year in a row, Packard guided Perry-Lecompton’s boys track team to a Big Seven League title. The Kaws were also co-champions at their regional meet and finished fifth at the state track meet. The 4×400-meter relay team set a meet record in the event during a runner-up finish.

Garret Durr, Eudora — In his final meet of his EHS career, Durr netted a medal and came away with a school record. Durr placed third in the Class 4A boys pole vault by clearing 14 feet 6 inches, which matched the team record in the event. Durr was also a regional champion in the event. He was a member of the 4×100-meter relay team that set a school record as well.

Ben Hanson, Veritas — The Veritas sprinter recorded multiple event victories during his junior season. Hanson won the 100-meter run at three different meets, logging a season-best time of 11.68. Hanson also won the 200-meter run at the Oskaloosa Invitational with a mark of 24.4.

Graham Hough, Lawrence — As a sophomore sprinter, Hough qualified for the state track meet in two different individual races. Hough notched fifth place in the 100-meter run with a time of 10.92. He narrowly missed a trip to the podium in the 200-meter run, placing ninth with a mark of 22.91.

Matt Jackson, Baldwin — It was a successful spring for the Baldwin sprinter. Jackson ended up with two medals at the state track meet, placing fifth in the 200-meter run and sixth in the 100-meter run. He won both events at both the regional meet and the Frontier League meet. His fastest time in the 100 was 11.02, while his best mark in the 200 was 22.15.

Henry Nelson, Bishop Seabury — Highlighting Bishop Seabury’s first year as a track program was Nelson. The junior distance runner locked up two state medals as the team’s only representative at the state meet. He finished third in the 3,200-meter run (9:56.96) and fourth in the 1,600-meter run with a mark of 4:36.79.

Devin Owings, Baldwin — The senior jumper took home two medals after a strong weekend at Wichita State’s Cessna Stadium. At the state meet, Owings placed seventh in triple jump and finished seventh in long jump. Owings won the long jump competition at regionals and his best mark all year was 20-11.75.

Cole Sample, Tonganoxie — As one of two area state champions on the boys side, Sample had a remarkable junior season. He won the Class 4A boys shot put competition with the best throw of the meet. He won a league and regional title in the event as well. Sample added a bronze medal in the discus competition during the state meet.

Malachi Starr, Free State — In his last showing as a Firebird, Start claimed two state medals in sprinting events. Starr placed third in the 400-meter run with a time of 50.18. He also was a member of the 4×100-meter relay team, which took fifth with a mark of 43.06.