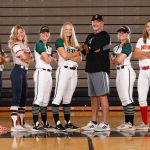 The Oklahoma State commit was named the Gatorade Kansas Player of the Year as a sophomore, posting a 0.59 ERA in 17 outings. Clopton went 16-1 with 200 strikeouts and 15 walks in 107 innings. Opposing team posted a .081 batting average against Clopton, who was the unanimous choice as Player of the Year in the Sunflower League.

The Firebirds handled having a target on their backs, compiling a 23-2 record en route to a second consecutive state title. Ice was named the Sunflower League Coach of the Year after leading FSHS to a league title. Free State won 14 games in a row to close out the 2019 campaign, netting five shutouts in as many games in the postseason.

Kyla Etter, Eudora — Despite missing four weeks due to a freak injury, Etter was dominant in the circle this season. Etter was 7-0 with a .583 ERA in 36 total innings, striking out 44 batters and walking five. Etter also hit .500 with 11 RBIs in 28 at-bats, lifting Eudora to the Class 4A state tournament in her senior season.

Audrey Flowers, Baldwin — To cap off an illustrious career with Baldwin, Flowers batted leadoff for most of her senior season, which was something she hadn’t done before. She ended up leading the team in runs scored with 25 and was second on the team in hits with 30. Flowers posted a .448 batting average, and was remarkable in center field all year.

Graci Folks, Perry-Lecompton — The Kaws leaned on Folks this season with a younger squad. The senior was an important leader, served as the leadoff batter and was a force in center on the defensive end. Folks finished with a .333 batting average and 12 RBIs, committing just one error on 34 opportunities in the field.

Lauren Gray, Tonganoxie — After playing in the infield the last two seasons, Gray moved to catcher in her junior year. She was recognized with an honorable-mention All-League selection for her play behind the dish. Gray posted a .400 batting average, recording seven doubles and two homers. Gray only struck out once all season for the Chieftains.

Angelina Harjo, Lawrence — Amid a tough season, Harjo was willing to do anything for the Lions. She played all three outfield positions and only committed one error. She led the team in strikeouts in 15 innings, and provided plenty of leadership as a senior. At the plate, Harjo finished with 22 RBIs and eight doubles to earn a second-team selection on the All-Sunflower League team.

Megan Kennedy, Eudora — For the last three seasons, Kennedy has had an ability to make any play at shortstop. In her senior campaign, Kennedy logged a .519 batting average in 54 trips to the plate. Kennedy drove in 14 runs and scored 26 herself, while recording five doubles and one triple.

Georgia Rea, Free State — Anchoring the top of the order, Rea managed to hit .500 in 84 at-bats from her leadoff spot. The sophomore first baseman delivered 12 doubles, drove in 15 runs and stole 10 bases. Rea hit three homers and three triples and only struck out four times.

Sara Roszak, Free State — The sophomore shortstop was not only sensational with her glove, but Roszak all finished with a .447 batting average. Roszak recorded 34 RBIs on 34 hits, finishing with eight doubles and five homers. Roszak only went back to the dugout via a strikeout three times in 76 at-bats.

Sierra Smith, Eudora — Arguably Eudora’s most consistent hitter the past two years, Smith had a junior season to remember. She finished with a school-record 27 RBIs to go along with a .508 batting average. Smith tallied 25 singles and only committed two errors as a first baseman for the Cardinals.

Lindsey Toot, Baldwin — In her first year as a varsity starter, Toot led the team in batting average (.521), hits (37) and RBIs (26). Toot started the season batting sixth, but worked her way up the order. Toot was voted as a first-team selection on the All-Frontier League team as a first baseman.