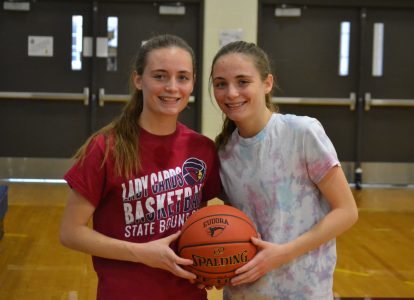 Twin sisters Reagan and Riley Hiebert pose with a basketball during a practice Friday morning at EHS on Dec. 20, 2019. Both players are off to a strong senior season for the Eudora girls basketball team.

Eudora high school senior guards Reagan and Riley Hiebert are close on and off the basketball court — in fact they describe themselves as best friends since birth.

The twin sisters are both starters for a Eudora girls basketball team with a 4-1 record. They guard each other in practice, they run together on a daily basis and they even work at the same local Sonic as carhops.

The duo’s biggest divide seems to be that they are required to wear different jersey numbers. Reagan wears No. 4 and Riley wears No. 5.

“I don’t think we have ever gotten sick of each other,” Reagan said. “We are a really good duo, we are like a package deal.”

That chemistry is evident on the court, where the Hiebert sisters always trust where each other will be on the court.

Perhaps the best example of that occurred in the sub-state championship game last year. Leading by only 6 early in the second half, Riley started to run a set play against Labette County. Once Reagan’s defender came over for the double team, Riley knew what to do.

She abandoned the play and dished a pass to Reagan, who drilled a 3-pointer off the assist. Eudora eventually earned a 36-17 road win over Labette County, notching the program’s first state berth in 10 years.

“That’s when we got the ball rolling,” Riley recalled. “We can read each other. If I drive to the baseline, she will float to the 3-point line.”

The twins have been teammates since they started playing competitive basketball in the first grade. Back then, they played on a boys basketball team for three years until they moved to Eudora.

On the hardwood, the Hiebert sisters have always had the same style of play since first picking up the sport. They will dive for every loose ball and play with a relentless mindset on both ends of the court. Both of them have also grown as players due to their commitment in the offseason.

Riley has improved her dribbling, while Reagan has made strides in her court awareness. They spent a lot of time in the summer making such improvements, even though they also spent a bulk of their time running to prepare for their senior year competing in cross-country and track.

A normal day for the Hiebert sisters started with a run between 6-7:30 a.m. They then would practice their craft for basketball between 8-10 a.m. before working for six hours at Sonic. After work, they sometimes would even compete in basketball scrimmages.

“We are just doing what we love,” Reagan said. “It is tiring sometimes, but it is pretty good.”

That level of commitment has led to a successful senior year for both Reagan and Riley.

In cross-country, Riley finished fifth at the Class 4A state meet with her best time of the season. She also was a runner-up at league and regionals. Reagan ended up in the top 10 at every meet of the season except the first one, including a 10th-place finish at the state meet.

Through five games of the basketball season, the tandem of Reagan and Riley have accounted for 100 total points. Reagan has scored in double figures in three games, including a 15-point performance in the season opener. Riley produced 18 points against KC East, which was one of her two double-digit outings.

It has helped Eudora (No. 7 in Class 4A) already earn some hardware this season, finishing third place at the Paola tournament. The Cardinals have postseason aspirations again after back-to-back winning seasons for the first time since 2009.

But high school won’t be the end of their time as teammates. In fact, they plan to run indoor track, outdoor track and cross-country together at the collegiate level.

“I think we would be lonely if we didn’t have one another,” Riley said.

Fortunately for the Hiebert sisters, they won’t have to worry about that any time soon.

“We’ve always wanted to stay together,” Reagan said. “It is just that type of bond.”