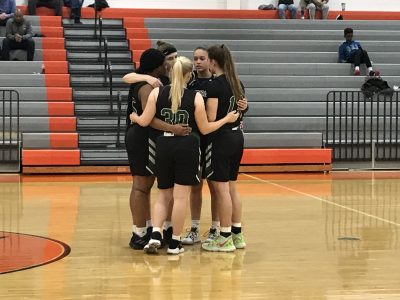 “Shawnee Mission Northwest is a really good basketball team,” Free State coach Nick Wood said. “And you know what, our margin of error is really small and we’re still learning how to play together and what it takes to compete at this kind of level. So it was a hard lesson tonight.”

Because of this, Free State fell to Shawnee Mission Northwest 72-36 on the road Friday. Senior guard Caely Kesten led the way for the Firebirds with 13 points.

Friday was also just the third day with a fully healthy roster for Free State.

“We’ve had players hurt all year long,” Wood said. “So we’re going to be fine.”

And it didn’t take long for the Cougars to snatch momentum as SM Northwest jumped out to a quick 11-2 lead. Following a 3-pointer from SM Northwest junior forward Kennedy Taylor, Wood called a timeout to allow the Firebirds to catch their breath.

For Free State, it was more of a struggle offensively, as Kesten led the way with 4 points in the first quarter. Junior forward Shannon Clarke added a layup and senior guard/forward Joy Nunoo hit a corner 3-pointer, but the Firebirds still trailed 22-9 at the end of the first quarter.

For Wood, the leadership of Kesten and Clarke was a huge boost of confidence as the Firebirds continued to battle.

The second quarter was still a bit sloppy for Free State, as the Firebirds committed eight turnovers. Clarke stepped up in this quarter — scoring all 8 points for Free State — but once again the shooting and aggressive defense of the Cougars proved to be the difference.

“It’s kind of pick your poison (with their offense),” Wood said. “The girls battled and they did what we asked (them) to do. But to their credit, tonight they made shots and that’s just part of the game.”

Not much changed in the third quarter either, as SM Northwest outscored Free State 21-10. The Cougars stayed hot shooting, with sophomore guard Ericka Ojeda adding a pair of 3s and Taylor continuing to score in transition and get to the foul line.

For the Firebirds, Kesten ended her scoring drought with a 3-pointer and junior forward Daeci Jaillite-Walker adding 5 points as well.

But throughout the third and fourth quarter, the Cougars were in full control in both half-court sets and out in transition. SM Northwest’s lead stretched to 68-36 and the Cougars stayed the course to a convincing victory.

There were moments throughout the game for Wood that showed signs of learning from “the standard” of SM Northwest, such as being aggressive offensively and following the scouting report on defense.

“What I was most excited about was I saw us continue to battle, continue to fight, the girls continue to stick together and offensively there were signs of who we can be,” Wood said. “But now we have to be more consistent with it.”

So the message that Wood preached in the locker room postgame was simple: “we’re going to be ok.”

“It’s December, and when March gets here we’re going to be fine,” Wood said. “We’re going to figure out who we are and what it takes to be successful and I’m excited to see the growth that we’re going to have throughout the year.”

Free State will next play Shawnee Mission South at home on Jan. 7.