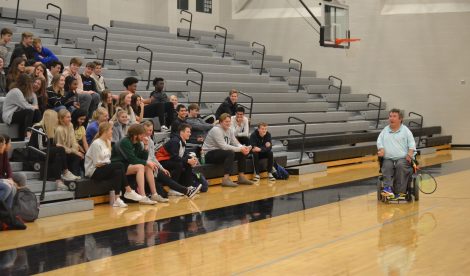 Nick Taylor, a Wichita native, gave a speech to about 70 Free State student-athletes Thursday afternoon at FSHS. Taylor is a five-time Paralympic medalist in his career in wheelchair tennis.

Nick Taylor, a Wichita native, began with a friendly jab at the Kansas football program and closed his time as a guest speaker at Free State by asking students a rhetorical question about what they want to accomplish in life.

Such is life when sitting in on a guest speech by Taylor, who has a long list of accolades in his career as a wheelchair tennis player. On Thursday, approximately 70 FSHS students got that back-and-forth between humor and an important message during Taylor’s speech about setting goals and fulfilling them.

The five-time Paralympic medalist has given two such speeches in the last week, and he has a similar theme throughout most of his stints as a guest speaker.

“I think it is really good,” Taylor said. “What does it for me is you hear stories sometimes from teachers about how a student will walk in 10 years after they graduate. They will say that you made a difference at this point. That’s why I’m here; I have people that do that now.”

The perfect example of that is the very reason why Taylor was in town in the first place.

Free State sophomore Emma Evans was about 8-years-old when she first sat in on a presentation by Taylor. It took place at her tennis club, and Evans was blown away when watching Taylor in action.

So when Free State’s Student Athletic Leadership Team was looking to nail down a guest speaker, Evans knew just who to reach out to. Evans originally emailed Taylor about two months ago, and then she helped organize the event along with FSHS Athletic Director Amanda Faunce.

“Tennis is very particular and mental,” Evans said. “When you hear the stories and hear the hours he trained, it was really great to hear from a tennis player. It is just so different.”

Taylor spent much of his time talking about his path to becoming a four-time paralympian. He was born with arthrogryposis, a congenital disease that contracts and restricts muscular development. Still, Taylor chose to pursue tennis in eighth grade. He started out by hitting the tennis ball at his garage door.

As a high school tennis player, Taylor found a way to eventually be the top tennis player on his team by his senior year. Taylor never won a match at the high school level, but his growth led to more success in wheelchair tennis. All of these anecdotes were even new to Evans.

“I didn’t know the hours he put in until today,” Evans said. “He put in his time, and I thought that was really great.”

Taylor has since won more than a dozen Grand Slam titles and has been ranked in the top-three in the world for the past 14 years in his pro career.

With his medals in a case next to him, Taylor closed his speech by challenging those select FSHS athletes to identify their garage door and their medal in their respective sport and life.

“You have to set goals, and you have to work hard,” Taylor said.