Tour of Lawrence cycling race to return to KU in 2020 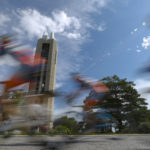 Female competitors blur past the Campanile along Memorial Drive during the 2014 Tour of Lawrence KU Circuit Race on Saturday, June 28, 2014.

The Tour of Lawrence will be bringing cyclists back to the University of Kansas next summer.

For the first time since 2014, the event will have a race on the collegiate campus during its tour. Cindy Bracker, who has been the race director since 2018, said that KU will be the location for the third and final day of the event. The 2020 tour is slated to take place July 3-5 in Lawrence.

Bracker wanted to include the collegiate campus during last year’s four-day tour, but was unable to because of construction. With the help of Charlie Persinger, who is the Director of University Ceremonies and Special Events, the event will be making its triumphant return to KU.

The site of the first two days of the event have yet to be confirmed, though Bracker is hopeful that downtown Lawrence can be the location for the race on July 4. That was the case last year, when the race returned to downtown after a brief hiatus.

Yet this annual event has continued to grow ever since local cycling group Women’s Free State Racing began organizing it in 2018. According to Bracker, the Tour of Lawrence had about a 50% increase in participation last summer and 2020 figures to be even bigger than that.

With the race taking place on campus, it could bring even more cyclists who want that type of challenge. The KU race will feature over 450 feet of climb per lap during the five-mile circuit.

“Adding that KU course makes it really challenging,” Bracker said. “Anybody who has ever been a KU student understands the KU hills. When you are doing multiple laps up that hill, it is a really, really big challenge (for) any cyclist. All of those fields will be stacked with the best (racers) of that category.”

The tour includes races for men’s and women’s professional, amateur and youth categories. Online registration won’t be available until late February, but Bracker is still seeking sponsors and volunteers for the event.

“With this race being bigger than it has been in the past, there is going to be bigger needs,” Bracker said. “I think there are a lot of opportunities to make this race the community-event that it once was.”