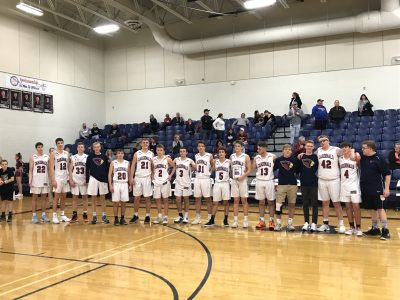 Eudora boys basketball accepts its second place plaque at the Cardinal Invitational. The Cardinals fell to Harmon 66-35 on Thursday, Dec. 12.

A second-place finish in a tournament — especially in December — is nothing to lose sleep over. And while Eudora boys basketball coach Kyle Deterding recognizes that, the Cardinals’ 66-35 loss to Harmon on Thursday still stings.

“Overall (the tournament) was a positive,” Deterding said. “But this was a sour taste to end on.”

While the Cardinals held on against the Hawks for much of the first half, it was the second half where Harmon took control of the pace of play and, ultimately, the game itself.

“Obviously they’re a fast team, so we don’t want them to run down the court and back,” Eudora junior forward Ty Abts said. “So we just wanted to limit their speed and take control of what we needed.”

Despite this result, the Cardinals still put themselves in a position to compete for a tournament title. Coming into its home tournament, Eudora wanted to show out in the 2019 Cardinal Invitational.

“Well obviously we want to do well for everyone and all the parents,” Abts said. “But I think what we need to do and what the mindset is to take care of business, go in and do our best.”

Wins over KC East (68-38) and Olathe Northwest (57-41) provided a necessary boost of confidence for Eudora.

“We learned that we work really well together when we start off early,” Abts said. “We get going in the first quarter then we ease down through the other quarters. But overall we need to learn how to close out games (better).”

And even though the tournament final was a bit lopsided — or as Deterding said “some good and some bad” — going up against a fast-paced and talented team can pay dividends later in the season.

And a way of doing that in future games is staying in the moment in high-pressure situations, something that Abts said he’s focused on this past offseason.

“What I’m going to takeaway is my composure and willingness to stay calm during the game,” Abts said. “And not let everything around me take control of my mindset.”

This was a point of frustration for Deterding in the Harmon game, with so many of the veterans, especially the seniors, having “such a lack of composure in that long stretch.”

“Hopefully we’ll learn from it,” Deterding said. “If we don’t, we’ll be in trouble. If we do, we might be all right.”

Regardless of the result Thursday, that senior class “sets the tone” for how the Cardinals play and can accomplish this season.

“There’s a lot of them, and they keep us juniors and sometimes sophomores in check,” Abts said. “If we’re falling down one game, they pick us back up. It’s really helpful.”

Deterding said the Cardinals will have to “learn from it and move on” quickly with a game against Tonganoxie on Friday. And with a core group led by Abts and others, Deterding is hopeful Eudora will bounce back and grow from this tournament.

“We’re just going to have to get back to what we’re doing and make sure we get shots every time,” Deterding said. “And try to take care of the basketball because it’s hard to be in a ball game if you can’t get shots.”