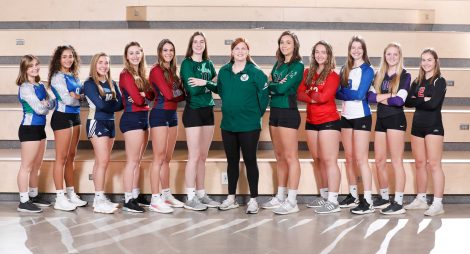 In her first season at the helm, Savage directed Free State back to the Class 6A state tournament. The Firebirds ultimately lost all three matches in pool play, finishing the year with a 24-15 record. FSHS also won its first Sunflower League title since 2017, going 11-1 against league foes this fall.

Hamilton, who will play at Indiana State next year, finished her four-year career with over 1,000 kills. She was a first-team All-Sunflower League selection in 2018 and 2019. Hamilton was named to the Topeka Seaman All-Tournament team earlier in the year as well.

Gabriella Aubel, Bishop Seabury — Aubel anchored the Seahawks during her senior season, providing leadership and strong play on a nightly basis. The outside hitter was ranked in the top 25 in Class 2A all year in aces per set (0.8) to go along with her 131 kills this fall.

Hadley Bird, Lawrence High — The Lions weren’t able to defend their state title, but 2019 was a strong season for Bird. The junior libero led the Sunflower League with 502 digs during her first varsity campaign. Bird was voted to the second team by the league coaches.

Emma Boulton, Veritas — In her senior season, Boulton led the way for the Veritas volleyball team. She posted a .210 hitting efficiency while recording 561 total assists this year. Boulton averaged 6.3 assists, 1.64 digs and 2.6 aces per game for the Eagles.

Anna Burnett, Baldwin — Leading the way in several statistics for the Baldwin volleyball team was Burnett. The senior outside hitter played in all 32 games for the Bulldogs, recording 254 kills on 835 attempts. Burnett notched 41 aces, 408 digs and 25 blocks during her final season for BHS.

Aubrey Duncan, Free State — It was an impressive rookie season for Duncan. The freshman middle hitter paced the Sunflower League in hitting percentage and ranked sixth in the league in blocks with 84. Duncan’s play earned her a second-team selection on the All-Sunflower League squad.

Erin Gallagher, Tonganoxie — Gallagher, who will be playing softball in college next year, was the team’s leading hitter on the outside. She finished with 262 kills and 19 total blocks for the Chieftains.

Delaney Franklin, Eudora — As one of the most consistent athletes on the Cardinals squad, Franklin helped her team post a 27-15 record during her senior season. Franklin, who will play volleyball at Baker University next year, recorded 431 digs this year, setting a single-season record. In total, she racked up 833 digs in her high school career.

Shea Hanna, Bishop Seabury — Even as a sophomore, Hanna was putting up impressive numbers this fall. Hanna ranked in the top five in Class 2A in digs (420) and ranked in the top 25 in aces per set (0.6) during her second season with the Seahawks.

Jenna Keller, Perry-Lecompton — Keller finished her high school volleyball career with her name on the all-time leaderboards. She had the top mark in career digs with 1,264 and second in career kills with 953. The senior registered 354 digs in 2019 for the Kaws, and was unanimously voted to the all-league first team.

Keagan Shockley, Eudora — Shockley finished her senior season with 446 kills, which was the fourth-best single-season mark in school history. She will play volleyball at Pittsburg State University next year, and she finished her EHS career with 982 total kills.