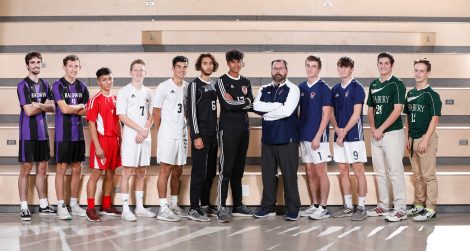 Erpelding’s Cardinals finished just shy of qualifying for the Class 4A-1A state tournament, but it was still a special season for the Eudora squad. Eudora went 12-6-1 in 2019, which included the team’s first regional title in program history. The Cardinals were eliminated with a 1-0 loss to Heritage Christian Academy in the quarterfinals.

As the engine of the Baldwin soccer team, McCune helped his team win double-digit games for the second year in a row. The junior midfielder was the best at winning 50/50 balls and faced double-team situations throughout the year. He finished with 13 goals and 14 assists — the most combined scores and assists by a Baldwin midfielder since 2012. He also scored five game-winning goals for the Bulldogs in 2019.

Jordan Barth, Baldwin — Behind a strong work ethic, Barth had a memorable senior season. Barth was one of the best centerbacks in the state in his lone season at the position. He controlled the backline with his speed and was a scoring threat on set pieces. He finished with five goals and four assists to earn a first-team All-Frontier League selection at his position.

Sam Bayliss, Bishop Seabury — The Seahawks wouldn’t have been able to survive an injury-plagued season without Bayliss. The senior centerback played on a bad ankle for the first five games, but he still held the entire defense together and shut down some of the top scorers in the state. Bayliss also finished off attacks, scoring 14 goals for the Seahawks.

Keaton Herron, Eudora — After moving Herron from wing to the middle, Eudora went 9-3 over its last 12 games. Herron, a junior, was a dynamic player wherever the Cardinals needed him, though. He led the team with 11 goals and seven assists, breaking both single-season school records. Herron also had the game-winning goal in the regional final for Eudora.

Pete Junge, Free State — With Junge as the team captain, Free State won its first regional title in 10 years. Junge, a midfielder, scored eight goals and recorded three assists to finish as the team’s highest-scoring player. He provided plenty of leadership for a team that was under the direction of a first-year head coach.

Matteo Kalusha-Aguirre, Lawrence High — While the Lions ultimately fell in the regional championship, Kalusha-Aguirre helped them get that far in the postseason. He was a three-year letterman and the team’s top midfielder during his senior season. Kalusha-Aguirre was also a co-captain for LHS this year.

Kanak Masten, Lawrence High — During a seven-win season, Masten was the team’s leading scorer. Masten, a three-year letterman for LHS, netted 11 scores during his senior campaign.

Dylan Meier, Eudora — Through the first seven games, Meier played all over for the Cardinals. He eventually settled in at left back, where he became a lockdown defender. Meier has a good left foot, but he developed his right this year as well. He finished with eight goals and six assists during his junior campaign.

Beck Oldridge, Bishop Seabury — Due to a couple of injuries, Oldridge was asked to embrace a larger role as a freshman. He did just that, producing 24 goals in 15 matches. Oldridge even had to find ways to score through traffic on his way to setting the program’s single-season scoring record.

Hayden Robinson, Free State — The Firebirds won 10 games in 2019 thanks in large part to their play on the backline. Robinson was the top defender for Free State this fall, which was a testament to his strong work ethic. He was voted to the second team on the All-Sunflower League squad as a defender.

Javier Trujillo, Tonganoxie — Trujillo can place the ball anywhere on goal from any angle on the field. That was clear in 2019, when Trujillo recorded 14 goals and two assists for the Chieftains. He was ultimately named to the first team on the All-Frontier League squad as a forward.