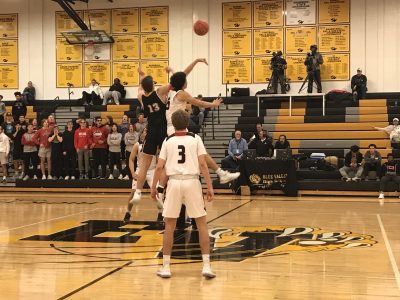 Stilwell — As if the game couldn’t be any more dramatic, it was a single layup that decided the Blue Valley Shootout final.

Thanks to a ferocious comeback, Olathe South snatched a 63-62 overtime victory over Lawrence High in the Blue Valley Shootout final Friday. Junior guard Zeke Mayo led the way for LHS with 26 points, shooting 5-of-6 from 3-point range.

“I’m proud of our guys — they fought,” LHS coach Mike Lewis said. “You know, we had a series of things that didn’t go our way, but our guys hung in there and we gave ourselves a chance. We faced a lot of adversity tonight.”

Three-point shooting was an emphasis for the Lions in the first quarter, as Mayo hit two from deep and senior guard Peyton Mallory added another early. LHS jumped out to a 12-2 lead, forcing Olathe South to change its defensive approach.

“(Mayo) was tough,” Lewis said. “We played him a bunch and relied a lot on him. He needed that game to have a bit of momentum and confidence for him.”

The Falcons quickly switched to a press, which initially worked as Olathe South rattled off a 5-0 run to get back in the game. However, Mayo was there to settle things down and regain momentum as the Lions went into the second quarter up 14-7.

Quartlebaum also stretched the lead back to double digits with two and-1 layups in transition.LHS took a 31-20 lead going into halftime.

The Falcons were able to capitalize, cutting the lead to 34-29. As for the Lions, it was another chance to respond.

LHS managed to hold on for a 41-33 lead at the end of the third quarter, but the momentum swing in Olathe South’s favor was evident.

“We had to finish plays,” Lewis said. “We reacted a little too much to the officiating and just had to be a little bit more sound defensively. And be ready to compete — it’s a four quarter game.”

After a 3-pointer from Olathe South senior guard DJ Stubblefield and a tough layup from senior forward John Boyer, the Falcons cut the lead to 42-38. LHS was forced to take a timeout to regroup.

About a minute later, Stubblefield made another triple to cut the lead 44-43 with just over three minutes to play. He later tied the game at 46 with a 3-pointer, but Mayo was there to respond with a triple of his own.

Finally, Olathe South took the lead with 17 seconds left on a 3-point play from junior forward Branden Eckles making a layup and the free throw. But once again — even though he was double-teamed on the inbound — Mayo received the ball and sank a floater with 5.2 seconds remaining to regain the lead.

But Stubblefield was then fouled on a 3-point shot, giving him three free throws. He made 1-of-3 to send it to overtime.

Amidst the chaos, Lewis just tried his best to make sure his team stayed in the moment.

“You start throwing 50 things at them and their heads will spin,” Lewis said. “So you just try to settle them and rely on our teamwork and some simple things like moving the ball and being in a position to rebound.”

And after a back-and-forth effort, Eckles got a layup to go at the buzzer for the win.

Despite the last-second loss, Lewis said the Lions are going to move past this game quickly.

“It’s one of those (games) where if you have a chance to play for a championship, you want to play to win,” Lewis said. “And when you don’t win it hurts. But it’s also December and we’re still finding out a lot about who we are.”

LHS will next come back home to face Shawnee Mission North at 7 p.m. Friday.