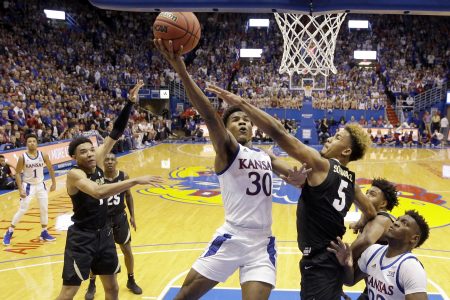 Kansas' Ochai Agbaji (30) gets past D'Shawn Schwartz (5) to shoot during the first half of an NCAA college basketball game Saturday, Dec. 7, 2019, in Lawrence, Kan. Kansas won 72-58. (AP Photo/Charlie Riedel)

Saturday’s opponent might have entered Allen Fieldhouse representing a new conference and with a shiny Top 25 ranking next to its name. But, in many ways, it was still the same old result between Kansas and Colorado.

Facing the second-ranked Jayhawks on their home floor for just the second time since leaving the Big 12 Conference for the Pac-12 in 2011, No. 20 Colorado was overwhelmed by the size, speed, athleticism and toughness of second-ranked Kansas in a 72-58 KU victory.

The loss was the first of the season for Tad Boyle’s Buffaloes (7-1) and the seventh win in a row for Bill Self’s Jayhawks.

“KU does not have a lot of weaknesses,” Boyle said after the loss. “KU beat us tonight, very soundly. People are going to see that score, but it really wasn’t as close as the score indicated.”

Kansas held Colorado to just 22 points on 27% shooting in the first half, forcing nine CU turnovers and outrebounding Colorado 24-13.

The result was a 12-point lead that might not have looked all that special on the scoreboard but proved to be more than enough to keep Colorado under wraps the rest of the way.

As if that weren’t enough, KU sophomore Ochai Agbaji stole the inbounds pass to start the second half, stealing with it any hope CU had of staging a comeback.

Four minutes into the second half, KU’s lead had ballooned to 18 and the Jayhawks (7-1) coasted for their 30th consecutive victory over Colorado in Allen Fieldhouse.

Agbaji played a huge role in all of that.

After scoring 8 points on 4-of-7 shooting in Saturday’s first half, Agbaji exploded for 12 more on 4-of-4 shooting from 3-point range in the second half to finish with 20 points in a breakout game of sorts.

The funny thing about Agbaji’s hot shooting night was the fact that he thought very little about his shot leading up to Saturday’s tipoff.

“Going into this game I had a different mindset,” Agbaji said. “I didn’t really care if my shot’s falling, but defensively that’s where I can get my energy from.”

That perspective led to 12 rebounds and all kinds of hustle plays for the Kansas sophomore who entered Saturday shooting 40% for the season and just 34% during the previous five games.

“It felt good,” Agbaji said. “I’m not really trying to worry about if it goes in or not, but, moving forward, that’s good.”

KU coach Bill Self agreed and said Saturday’s performance was one of those light-bulb moments for Agbaji, who had been hearing from the KU coaching staff about how beneficial focusing on defense, hustle plays and team basketball could be.

“That’s what we’ve been talking about the whole time is worry about the things you can control,” Self said after Saturday’s victory. “And I don’t think he’s rebounded the ball well, like he’s capable of. But he got 12 tonight and three offensive, which was great. … I thought Ochai played really well, by far our best performer today.”

The only time he was not came on a botched alley-oop attempt on an inbounds pass from Devon Dotson. Despite making the perfect cut and flying uncontested around the rim, Agbaji banged the dunk attempt off the back iron and cost his team 2 points.

“I just didn’t get my feet under me,” he said with a laugh. “I should have just laid it in but I was going for the highlight play.”

Despite shooting just 30% for the game, Colorado never fully went away.

Throughout most of the second half, CU kept cutting into the Kansas lead, trimming it to 12 or 13 points, only to see the Jayhawks respond each time.

First was a 3-pointer from Isaiah Moss (3-of-5, 8 points) that pushed the KU lead from 49-37 to 52-37. One possession later, KU responded with an and-one opportunity by Udoka Azubuike (12 points and six rebounds) and one more time, after another CU bucket kept the Kansas lead at a dozen, Dotson threw a lob to Azubuike out of a broken play that led to a scramble that just as easily could have gone the other way.

Getting a shot was key for both teams on Saturday. Colorado, which entered the game averaging 14 turnovers per game, gave it away 17 times against Kansas, which only compounded the problem of not being able to make shots.

To make things worse for the visitors, just about everything they tried to throw at the Jayhawks failed to work.

Colorado opened in a 2-3 zone and Kansas forward David McCormack immediately took advantage of it.

Working in the high post, with space and options around him, McCormack hit three jumpers in the game’s first five minutes to help pace KU to an early 8-3 lead.

Despite Kansas casually and confidently passing the ball with ease around the perimeter versus the zone, the Buffs stayed in the defense for nearly the first quarter of the game. McCormack, a 61% shooter coming into the game, misfired on his next two shots before checking out midway through the first half.

Later, trailing by 18 still early in the second half, Boyle’s team threw a few looks of full-court pressure at Kansas and the Jayhawks carved through that like dummy offense during a practice drill.

Self was not pleased by his team’s late-game effort and he had the luxury of letting former KU point guard Devonte’ Graham explain why.

Despite his Charlotte Hornets playing Atlanta at home on Sunday night, Graham was sitting behind the KU bench on Saturday night for the Top 20 battle.

“When you play a team like Colorado, who’s got a really good team and you control the game and it’s a 22-point game or whatever with three minutes left and you end up winning by 14, you don’t leave out of here feeling near as good because, obviously, we didn’t finish the game right,” Self said. “(Graham) did tell the guys that that’s like my biggest pet peeve. So hopefully they’ll listen to him since they don’t listen to me very well.”

Despite the finish, Agbaji said the win, on the whole, was a positive outcome for his team considering Kansas had nine days between games and entered Saturday fresh off of the Maui Invitational tournament title.

“This was huge,” Agbaji said. “Coming back, getting a home win for the crowd. It was nice.”