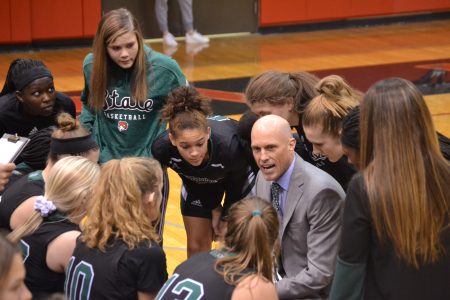 Overland Park — The Firebirds certainly got their money’s worth in the season opener Thursday night at Blue Valley West.

It was a back-and-forth battle night all night between Free State and Blue Valley West, as both teams traded punches down the stretch. FSHS forced overtime after being down by 3 points with 15 seconds remaining in regulation.

In the end, FSHS earned a hard-fought 36-33 overtime win during the first game of the Nick Wood era.

“We found out a lot about ourselves, and we needed to play a game to do that,” Wood said. “We talked before the game about who we are going to be and what is our identity. Those girls battled.”

But, at least early on, the game did not have the makings of a nail-biter.

Free State (1-0) did not hit a single shot in the opening period, falling into an 8-0 hole against Blue Valley West. The Firebirds missed all 10 of their shot attempts in the first quarter, while committing four turnovers in the process.

Yet the team didn’t back down, which proved to be a sign of things to come for FSHS.

“We had to get those jitters out of the way,” Wood said. “We are too talented. Once we see the ball go through the hoop and let the game come to us, it will settle in. We weren’t playing bad; we just weren’t scoring.”

The first period still featured some bright spots for Free State, particularly on the defensive end. Junior Shannon Clarke drew a charge and was credited with a steal along the perimeter. Junior Robin Todd also deflected a pass and ultimately came away with a steal.

Free State maintained that defensive intensity early in the second period, which really helped the team get going. Junior Evy Harrell and Clarke notched steals on the first two possessions, while the Jaguars fired a contested 3-pointer on the third trip.

At the same time, the Firebirds started to see the ball go through the net. Senior guard Caely Kesten, a Northwest Missouri State signee, netted the team’s first bucket at the 7:25 mark in the second period. And things started to roll from there for Free State.

“Coming off a .500 record last year, bringing a win with the experience we have is phenomenal,” Kesten said. “We are super happy about it.”

Free State scored 15 unanswered points to begin the second quarter, in which 14 of those points were produced by either Kesten or Clarke. It wasn’t until the 2:11 mark that Blue Valley West finally broke the scoring drought.

As a result, Free State claimed a 17-13 lead by the intermission. The Jaguars eventually evened things up, 20-20, by the end of the third quarter. They then led for much of the fourth quarter.

With 15.5 seconds left, Clarke hit a free throw to pull within 2 points. She missed the second free throw but followed her shot and forced a jump ball. On the ensuing inbounds play, Wood dialed up a perfect play to get Kesten posted up on the block. Clarke fired a pass to Kesten, who hit the game-tying layup with 7.3 seconds remaining in regulation.

“I think Coach did a good job of coaching us through plays and what to do,” Kesten said. “Everyone made good plays and played for each other. That’s what we needed.”

Clarke then drilled a 3-pointer on the first possession of overtime, and Free State never trailed after that en route to a narrow win. Clarke finished with a team-high 17 points, while Kesten poured in 14 points in the season opener.