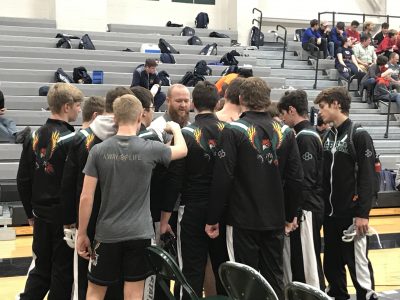 Free State wrestling coach Steve Burns talks to his team before their meet. The Firebirds defeated Holton and Olathe East in a double dual Thursday, Dec. 5.

“You get to wear it if you get a pin,” Free State coach Steve Burns said. “It’s an honor to wear it around your neck, and then you’ve got to hand it off to the next person once they pin. Hopefully it cycles through everybody on the team.”

Free State wrestling opened its season with a 44-34 win over Holton and a 42-31 win over Olathe East in a double dual Thursday night.

“We’ve got a bunch of young guys, so I was anxious to get them on the mat and see what kind of weapons we had in our back pocket,” Burns said. “It’s always a little bit of butterflies in your stomach for that first dual, so I’m happy to get the two wins under our belt to start the season.”

That chain reflects Free State’s strong start to the season. But it’s also one of the new wrinkles for Free State wrestling implemented by first-year coach Steve Burns.

“I don’t know about this thing,” Fincher said, with a laugh. “I was skeptical about wearing it at first, but I just put it on.”

Burns, who’s coached wrestling for 14 seasons — this is his 10th as a head coach — in Colorado and New Mexico before coming to Free State, is pretty confident stepping into a new program.

“It’s just learning new groups, new faces, new parents,” Burns said. “Give me a couple years and we’re going to be a pretty good force in Class 6A wrestling in Kansas.”

One of his trademarks already is his emphatic coaching on the sidelines.

“I like the energy,” Fincher said. “It kind of gets people excited.”

For Burns, it’s all about positive reinforcement, especially with a younger team. He said negativity is “the worst thing you can do” when discussing a match with a wrestler.

“I’m aggressive off the side of the mat, but my kids know it’s not in a negative sense,” Burns said. “But I also feel as a coach, sitting down and being quiet isn’t going to do them any good. If I can correct actions on the mat, that’s what I’m there for.”

With Fincher as the lone senior, Burns said he’s happy to build confidence in his team filled with underclassmen — four freshmen and two sophomores on varsity — and surprise some people this season.

“We’ve got a lot of building to go, but you can see tonight we’ve got a lot to look forward to,” Burns said. “I’m pretty happy about that.”

The Lions were led by Jack Elsten (106 pounds), Hunter Girard (113 pounds) and Kevin Honas (120 pounds) securing early wins over the Blazers. However, Gardner Edgerton quickly struck back, winning four of the next six matches. Eventually, the Blazers gained enough momentum in late matches to secure the victory.

LHS will next compete in a dual at Shawnee Mission West on Friday, before heading to the Leavenworth tournament Saturday.

The Lawrence High girls wrestling team also started its season, with the Lions competing in the Spring Hill Mixer on Thursday night.