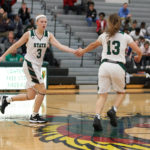 Free State Shannon Clarke (3) shake hands with teammate Caely Kesten (13) after she made a 3-pointer in the second quarter on Nov. 29, 2018 at FSHS.

Last season, a pair of area teams qualified for the state tournament and many individuals had successful seasons as well.

This year should be just as intriguing with interesting storylines to monitor throughout the year. Where will Eudora and Baldwin finish in the Frontier League and ultimately in Class 4A? How will four area squads handle the transition of dealing with a new coach this year? What players will have breakout seasons?

It will be fascinating to see how this year plays out. But before the season officially begins, let’s take a look at some of the top storylines regarding the area girls basketball teams entering the 2019-20 campaign:

Both Eudora and Baldwin played well enough to get to the Class 4A state tournament last year.

As a result, both teams enter the 2019-20 season with huge expectations. Baldwin is ranked No. 4 in Class 4A, while Eudora is listed at No. 8 in the preseason poll as voted on by the Kansas Basketball Coaches Association.

The Bulldogs will have to replace five seniors who went 83-8 in their high school career, but recent history would suggest that they can reload. Baldwin has notched four state berths in the last five years, which included a third-place finish during last year’s trip to the state tournament.

Eudora, meanwhile, is back after earning a trip to the state tournament for the first time in a decade. The Cardinals return plenty of players responsible for a 16-6 record, which ended with an opening round loss to the No. 1 seed in the Class 4A state tournament.

EHS plays host to Basehor-Linwood at 6 p.m. Thursday, while Baldwin travels to Paola at 6 p.m. Friday.

Over half of the area girls basketball teams will feature new coaches this season.

Nick Wood, who served as the head girls basketball coach at Lawrence High between 2009-14, will now guide a talented Free State squad. The Firebirds went 10-11 last year, falling to Garden City in the opening round of the Class 6A postseason.

Tonganoxie promoted Mitch Loomis this year after he served as an assistant for the girls basketball team over the last three seasons. Loomis has been the head baseball coach at THS for nine years as well. Lauren Gray, a two-year starter, is the lone senior for a team that went 4-18 last year.

Jami Hodge has plenty of experienced players coming back in her first season at the helm with Perry-Lecompton. The Kaws plan to implement a new system after going 7-13 and finishing sixth in the Big Seven. Seniors Jenna Keller and Blaise Ball will lead the way for the Kaws.

Veritas has a girls basketball team for the first time in two years, which will be led by head coach Lori Alvarado. Satchel Koch, Corissa Bandel, Lydia Alvarado will all play as freshmen, while Megan Malm should make an impact as a junior.

The Eagles suffered a 64-28 loss to Faith Christian Academy in the season opener on Tuesday. Veritas (0-1) travels to Manhattan Chief on Monday, Dec. 16.

Lawrence High will be challenged out of the gate to begin the 2019-20 season.

The Lions will travel to Topeka High at 7:30 p.m. Friday in the season opener. The Trojans are ranked No. 1 in Class 6A after falling to Washburn Rural in the state championship game last year. THS, which went 22-3 last season, will lean on 6-foot sophomore NiJaree Canady once again this year.

It will be a tough test for the Lions, who lost multiple key players from a team that went 12-10 (6-6 Sunflower League) last year. Regardless of the result, this type of game can help give quality experience to some unproven players.

Senior Sophie DeWitt, senior Ella Stewart, senior Paiden Bell, junior Ozi Ajekwu, sophomore Layla Harjo and freshman Amaya Marshall will continue to grow throughout the year in what should be a fun season for LHS.

There won’t be a shortage of standout basketball players in the area this year.

Free State will have a dynamic duo with Caely Kesten and Shannon Clarke this season. Kesten, a Northwest Missouri signee, averaged 10.8 points per game last year. Clarke, who is getting plenty of collegiate attention as well, averaged 12.7 points per game during her sophomore season.

Riley Hiebert is back for one more year with Eudora after averaging 15.0 points per outing last winter. Harper Schreiner had an impressive freshman season for the Cardinals, posting an average of 9.0 points and 4.0 assists per contest.

Keller is a three-year starter for PLHS and is able to play both post and guard. She averaged 9.7 points and 2.5 assists per game last season. The senior tandem of Anna Burnett and Josie Boyle will be crucial to Baldwin’s success this year as the team’s only returning starters.