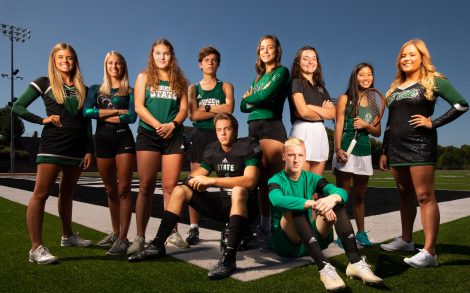 For Free State’s fall sports programs, the 2019-20 season will get underway next week.

A number of new coaches are ready for their debut season with the Firebirds. Free State’s boys soccer squad, which has a first-year head coach, will get the sports season started when it travels to Olathe South at 7 p.m. Tuesday. Many of the other fall sports teams will follow suit later that week.

Here is a peek at all of the Firebirds’ fall sports teams for the 2019 campaign:

Despite having a new coach, Free State’s football team still has huge expectations entering the year.

First-year head coach Kevin Stewart, who was previously an assistant at Blue Valley North, has talented players across the board at FSHS. Senior left tackle Turner Corcoran, a Nebraska commit, is the highest ranked recruit in the state. Senior receiver Marcus Preston, senior linebacker Malik Berry, senior defensive lineman Lovette Epelle and senior linebacker Joey Eddis all have a chance at playing at the next level.

Senior quarterback Colter Maldonado is back at FSHS after starting for Coronado High School in California last fall. Running back Tyler Bowden will be an important part of Free State’s run game. Devon Buck, Tai Newhouse and Ben Miller will be key pieces on the defensive side of the ball.

“My overall expectation is to improve each week,” Stewart said. “I think we have a lot of talent on this team, but I think it is really about improving each week. If we can make improvements, I think the talent will lead to success this year.”

Free State will compete in a preseason jamboree at 7 p.m. tonight at Shawnee Mission South. The season opener against Olathe West will take place Sept. 6 at FSHS.

It is Jayme Savage’s turn to leave her mark on the Free State volleyball program.

Savage, who used to play for the Firebirds during her high school career, is now the team’s head coach after nine seasons as an assistant. FSHS, which went 23-15 (10-2 in Sunflower League) last year, enters the season ranked No. 4 in Class 6A by the Kansas Volleyball Association.

Senior Kaitlyn Hamilton, an Indiana State commit, will be a dominant force in the front row. Senior Mya Gleason has broken every setting record at Free State and will lead a fast offense. Senior middle hitter Haley Hippe and senior setter Emily Arensberg also will play key roles for the Firebirds.

“We have the skill and ability to take this all the way,” Savage said. “It’s all about putting in the work and focusing on the process.”

With a new coach, the Firebirds aim to be better than they were a year ago.

“I do see a strong amount of drive in my varsity team,” Mohammed said. “They have worked hard, and they want to do well.”

Both cross-country teams bring back plenty of state qualifiers this fall. FSHS is poised for another high finish after the boys claimed runner-up in Class 6A last year and the girls finished sixth as a team.

“We return a good core group of state-experienced runners, who all have been working very hard this summer to prepare for the season,” said Steve Heffernan, who enters his 22nd season as the head coach. “That work along with their competitive drive should help us have a very successful season.”

The Firebirds will travel to Basehor-Linwood at 4 p.m. Thursday.

First-year head coach Katrina Farrow, who was an assistant for the previous three seasons, should have several producers this year. Junior Talia Gay will look to defend her all-around state title, as FSHS aims to build on its fifth-place finish at the state meet. Sophomores Chaney Finkeldei, Avery Qualseth, Tori Crockett and Ashley Mai are key returners as well.

“The competitiveness is electric in the gym and it’s driving all of my girls to try some bigger skills and to add some higher levels of difficulty, which makes for some very thrilling gymnastics,” Farrow said.

FSHS will compete in a meet at Shawnee Mission Northwest on Sept. 7.

Layne Meyer, who is in his seventh season, has plenty of depth this fall.

“We have more depth than we’ve ever had, and I look forward to the ongoing competition within our program for the varsity spots,” Meyer said.

The Firebirds will need some younger players to step up if they want to replicate last year’s success.

FSHS finished fourth as a team at the state meet last fall. The Firebirds were also regional champions and runner-ups at the Sunflower League meet. Anna Peard and Keegan VanPelt are back for another year after contributing to Free State’s success in doubles and singles, respectively.

“We are losing the core of our senior leaders and will be young with lots of spots to fill at our varsity spots,” third-year coach Randy Clark said. “Players will need to step up if we want to continue the success of the previous two years.”

Free State will compete in a meet at 3 p.m. Thursday at the College Boulevard Activity Center.