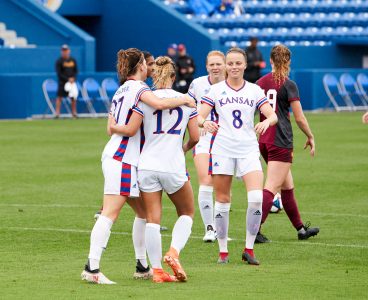 As she’s done often over her career, Kansas senior forward Katie McClure caught the opposing team’s defense sleeping. McClure stole the ball in the midfield in the fourth minute, sent a through ball to senior midfielder Ceri Holland and converted off a Holland cross.

Even amid pouring rain, McClure and Holland’s technical precision and chemistry shined through.

“I think it’s just fun to play in the rain,” Holland said. “I’m always just used to it, so I think it’s fun. It didn’t seem to really bother us at all.”

Regardless of the weather and slick playing surface — which claimed multiple victims before and during the match — the Jayhawks cruised to a 6-0 victory over Loyola-Chicago.

“We talked about just bringing every game (focusing on) the things we can control,” head coach Mark Francis said. “And that is your attitude, your mentality your work ethic.

And as that final score tells, KU controlled the match from start to finish on both sides of the field. The Jayhawks outshot Loyola-Chicago 18-0 and scored five goals in the first half, which is the most goals scored in the first half by Kansas since Oct. 18, 2002 (four goals against Central Missouri State).

KU finished with 23 total shots in the match, with 12 on goal.

“The midfield did a great job of finding pockets of space to get the ball in and then playing simple, combined, really controlled the tempo,” Francis said.

The KU defense also held down the back side, with senior defender Addisyn Merrick making multiple goal-saving slide tackles.

“She’s so quick, but she also reads the game well,” Francis said. “So if you combine those two things, she just anticipates and covers (the field) really, really well.”

But once KU found its groove again, the proverbial floodgates opened for the home side. Senior midfielder Sophie Maierhofer scored with 17:57 left in the half, followed by a converted penalty kick from Holland just 13 seconds later.

And by the end of the first half, KU seemingly started to show off with Holland and sophomore forward Kailey Lane orchestrating a midfield attack to go up 4-0, with a goal this time from Kathryn Castro.

Seven minutes later, Castro sent in a shot from the top of the box that was deflected and quickly tapped in by Lane for a punctuating fifth goal. This was both Castro and Lane’s first career goal.

“It was good to see a lot of people from our team contribute,” Holland said, “and we got a few different people on the score sheet.”

For the second half, the skies cleared up and KU remained in control of the pace of play, albeit with slightly fewer offensive fireworks in the box score.

That doesn’t mean the Jayhawks stopped attacking, though, as McClure still managed to send in a shot off a breakaway in the 28th minute that was narrowly deflected out of bounds. This set up a corner for KU, which Holland put in the back of the net with a header from the middle of the box for her second goal of the day to put KU up 6-0.

“It was obviously nice to find the back of the net myself, but for sure it was nice to see other people on the score sheet for the first time,” Holland said after her first multi-goal match.

After this lopsided victory, the Jayhawks finish the weekend undefeated and start the season 2-0 after a 4-0 win over Nebraska on Thursday night.

“I think if nothing else it gives you confidence, especially after the exhibition with 20 shots but not scoring,” Francis said. “These two games we’ve been a lot more efficient with the games that we’ve scored and the chances that we’ve finished.”

After not scoring in the series opener, the Kansas baseball team found its rhythm at the plate and won its first ...

The Kansas softball team did not score a single run in two games against a pair of ranked opponents on Friday ...

On a cold opening day in Nashville, Tenn., Kansas dropped the season opener to the Belmont Bruins, 6-0, at E.S. ...