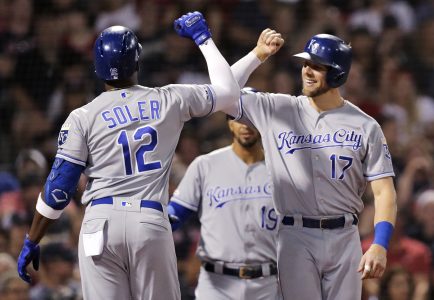 Kansas City Royals' Jorge Soler (12) is congratulated by Hunter Dozier (17) after his two run home run, his second of the night, during the fifth inning of a baseball game against the Boston Red Sox at Fenway Park in Boston, Tuesday, Aug. 6, 2019. (AP Photo/Charles Krupa)

Ryan O’Hearn also homered for Kansas City, which had lost eight in a row to the Red Sox — its longest slump ever against Boston.

Christian Vázquez had two hits with an RBI double for Boston, which halted its eight-game losing skid a night earlier.

The Red Sox also were held without a home run, ending a club-record stretch of at least one homer in 18 straight games in Fenway Park.

Junis (7-10) escaped a couple of early jams and gave up one run on seven hits, striking out four with one walk. He went at least six innings for the 12th time in his last 15 starts.

Andrew Cashner (10-7) gave up six runs on seven hits — three of them homers — over 5 1/3 innings, dropping his record to 1-4 since being traded from Baltimore to the Red Sox.

A night after the Red Sox got a solid start from Rick Porcello to snap their longest losing stretch since dropping eight straight in 2015, Cashner was chased with Boston trailing 6-1 in the sixth.

Soler’s first homer — his 30th of the season — left Fenway completely, making it 2-1 in the fourth.

Two innings later, he hit a drive that caromed off a billboard in left center to make it 6-1 after Hunter Dozier’s RBI single.

O’Hearn’s drive went into the seats in deep right, next to the Royals bullpen.

Kansas City center fielder Bubba Starling struck out swinging in all four at-bats but made a nice catch to save at least one run.

Cashner has given up at least six runs in three of his five starts after he was acquired from the Orioles in mid-July. He’s allowed seven homers in 28 innings and has a 7.53 ERA with the Red Sox.

During the eight-game losing skid, Boston’s starters had a 10.95 ERA.

Starling made a leaping catch on Vázquez’s fly ball at the wall to end the third inning and likely saved two runs.

Boston had already taken a 1-0 lead on Andrew Benintendi’s RBI single and had runners on first and third when Starling drifted back to the wall before jumping to make the grab.

Red Sox 2B Michael Chavis made a nice over-the -shoulder catch in shallow center off Dozier before tumbling to the ground.

Red Sox: Manager Alex Cora said knuckleballer Steven Wright is traveling to Florida to see Dr. James Andrews on Wednesday to get a second opinion on his pitching elbow. . Cora also said that RHP Heath Hembree received a platelet-rich plasma injection near his right elbow. SS Xander Bogaerts got the day off.