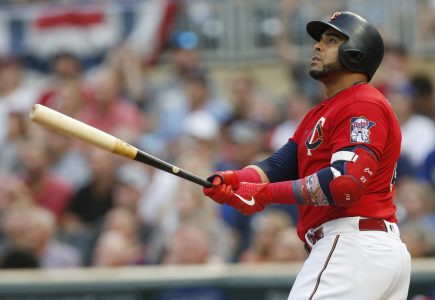 Max Kepler, Jorge Polanco and Eddie Rosario each had two hits for the Twins, who used a five-run seventh inning to maintain a three-game lead over Cleveland in the AL Central.

Cruz broke a 6-6 tie with a two-run double off the scoreboard in right-center field. The ball hit about 5 feet lower than his RBI double in the fifth, which was a couple feet from clearing the wall.

Miguel Sanó, Luis Arraez and Jason Castro added RBIs in the inning for an 11-6 lead.

Trevor May (4-3) needed one pitch to get the final out of the seventh inning before newly acquired Sam Dyson struggled for the second straight game. Dyson allowed three runs in the eighth before Sergio Romo got the final four outs for his first save with Minnesota. Acquired last Saturday, Romo had 17 saves in 18 attempts for the Marlins.

After four straight outs, Richard Lovelady (0-1) allowed Kepler and Polanco to get on base to open the seventh.

Cruz, Minnesota’s designated hitter who had just two pinch-hit plate appearances in Miami the last three days, crushed a pitch into the second deck in left-field for a 2-1 lead in the first.

In his last eight starts, Cruz has eight home runs among his 15 hits and 18 RBI.

Hunter Dozier had his first career multi-homer game and Cam Gallagher hit a solo shot for Kansas City, losers of four straight and seven of eight.

Down 4-1, Dozier homered leading off a two-run fourth for the Royals. His solo shot in the fifth inning made it 5-4 Royals and came three batters after Gallagher homered to start the frame.

Twins: CF Byron Buxton was scratched about 90 minutes before the game with left shoulder soreness. Listed as day-to-day, Buxton crashed into the wall in Thursday’s loss in Miami. . On the injured list since July 21 with right thumb inflammation, 1B C.J. Cron finished a two-game rehab assignment Friday morning in a Gulf Coast League game. Manager Rocco Baldelli expects him to be playing in a Twins game “pretty soon.”

It’s been a record-breaking kind of week for the University of Kansas swimming team in Morgantown, W.Va., site of ...

The Haskell Indian Nations University men’s and women’s basketball teams are both seeded in the middle of the ...

The Kansas women’s tennis team evened its spring dual record at 4-4 with a convincing 6-1 victory over Tulsa ...