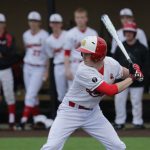 LHS senior second baseman Garrett Romero steps up to the plate during a home game against Olathe West on March 28, 2019.

Make that seven games in a row now.

Lawrence’s baseball team extended its win streak to seven consecutive games with a 5-2 victory over Olathe South Tuesday night at LHS. The recipe for win No. 7 was just like the six games before it, too.

The Lions, who have practically perfected the art of timely hitting by now, broke a 2-2 tie with three runs in the fifth.

“They played the same type of game that they have been playing,” LHS head coach Brad Stoll said. “In the fifth, we just had some big at-bats. We did some little things right and it was a really, really good offensive approach. So I was pleased with that.”

Sophomore shortstop Carlos Vasquez drove in the go-ahead run with a sacrifice fly in the fifth, allowing sophomore Jack Stoll to score. One batter later, Dobson drove in another run with a RBI base knock. Later in the frame, senior Chris Ritter had a timely steal to get in scoring position, and then scored on a single by senior Preston Harris.

It proved to be plenty of offensive help for freshman starter Grant Cleavinger, who allowed two runs off six hits over 6 1/3 innings of work. Cleavinger struck out six batters and walked three, throwing 61% of his 100 pitches for strikes.

“Grant was really good tonight,” Stoll said. “We kept talking about taking him out, but he just kept pitching his tail off.”

Another win for Will Hedges

Hedges carded three birdies, finishing two strokes lower than the next-best finisher in the event. Hedges posted a 37 on the front-nine, and recorded a 39 on the back-nine to notch his second win of his high school career.

“It was fun playing at Village Greens Golf Course,” Hedges said. “That golf course is in great condition and was more challenging than I expected with tree lined fairways. I am thankful that the rain held off, and I was fortunate to have a lot of putts go in.”

A pair of athletes each notched two top six finishes for the Bishop Seabury girls swim team at the Topeka West invite.

Senior Ella Blake won the 100 freestyle with a time of 56.29, which was over a full second faster than anyone else. Blake also placed fourth in the 200 IM with a time of 2:24.51, a mark that was nearly six seconds faster than her seed time.

Chieu was the definition of clutch, delivering the decisive blow with 12 seconds remaining in double overtime. The Lions improved to 4-5 on the year after notching their second victory in a row.

Heinz had a hat trick by halftime before being pulled back to play defensive sweeper in the second half. She finished with four goals in a 9-0 win over Highland Park. Heinz now has 11 scores in only six games.

Freshman midfielder Lizette Borjas scored twice for BSA, while Summer Hartzler also notched two scores. Junior outside midfielder Britain Hamm registered a goal in the lopsided win as well. Brooke Spurlock and sophomore Sophia Chindamo split time in the net, and both got credit for the shutout.

Bishop Seabury will travel to Topeka Heritage on Thursday.

Both Free State and Lawrence High boys golf teams were in action Monday afternoon at the Topeka West Invitational.

Senior Landon Berquist of FSHS was the highest city finisher, scoring an 80 to claim 21st on the individual leaderboard. Mitchell Spriggs placed 30th for the Firebirds with an 83. Senior Ross Brungardt led the Lions with an 84, which was good enough for 33rd. Free State’s Andrew Park also finished in the top 50, shooting an 86 to take 43rd.

Free State’s chances of extending its win streak will have to wait another day.

FSHS has won 13 games in a row, including all three games of the River City Festival last week.