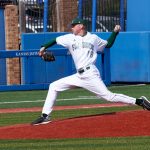 It was a busy and successful week for local athletes between Kansas Relays and the River City Festival.

Ethan Bradford, Free State baseball — Despite not knowing until after the last out, Bradford notched his first career no-hitter during a 1-0 win over Jefferson City (Mo.) Thursday night. The senior left-hander struck out eight batters, allowing only two baserunners in his monumental showing. The Firebirds have now won 13 games in a row.

Emily Heinz, Bishop Seabury soccer — The Bishop Seabury junior was on another level during a match between area teams. Heinz scored all four of the Seahawks’ scores during a 5-4 loss to Eudora. BSA goalkeeper Brooke Spurlock recorded an assist on one of the four goals by Heinz, who had 21 goals and four assists last year.

Landon Berquist, Free State golf — To lead Free State’s boy golf team to a top five finish, Berquist shot a 73 at the Seaman Invitational. Berquist finished fourth on the individual leaderboard, while the Firebirds claimed fourth as a team with a 328. Andrew Park also finished in the top 10 for FSHS, netting eighth with a 78.

Auna Childress, Free State track — It took just one leap for Childress to net a win and set a school record at the Kansas Relays. On her first attempt, Childress won the triple jump competition with a mark of 40 feet, 9 inches, which was nearly three feet longer than the next highest finisher. The junior Firebird also took eighth in long jump with a mark of 17 feet, 2 inches.

Talisa Stone, Perry-Lecompton track — A few different area athletes found the podium at the Kansas Relays this past weekend. Stone led the way for the Kaws, placing fourth in the high jump. Stone cleared 5 feet, 3 inches on one attempt to come home with some hardware.

Lawrence’s sprint-medley team, LHS track — Records are meant to be broken. Lawrence’s sprint medley team of Asjah Harris, Bella Kirkwood, Evann Seratte and Hannah Stewart took down a four-year old record with a time of 4:15.08. They placed fourth in the event at the Kansas Relays at Rock Chalk Park.