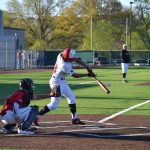 Lawrence High sophomore Carlos Vasquez hits a double during a game against Blue Valley West on Friday, April 19, 2019 at LHS.

The Mondi brothers were plated by a single to center via sophomore Devin Neal, which put the finishing touches on a signature win by the Lawrence High baseball team. Lawrence didn’t need to complete the fifth inning — nor the ensuing two frames — in its 11-1 run-rule victory over Blue Valley West Friday night at LHS.

It is the second victory in as many days by the Lions during the 18th annual River City Festival, and extended their win streak to five consecutive games. And it came against the No. 2 team in Class 6A via the Kansas Association of Baseball Coaches.

Miller twirled five innings of one-run ball, allowing two hits to go along with one strikeout and no walks. The Jaguars recorded a run off Miller in the top of the first, but he never wavered again.

LHS (8-4) drove in three runs in the third, despite not a single ball leaving the infield. Vasquez scored sophomore Jack Stoll on an infield single. One batter later, senior Hank Dobson reached on an error to allow Neal to score from third base. Senior Preston Harris then made it to first on a fielder’s choice, as senior Payton Cummins crossed home plate.

Yet the Lions were celebrating each run as if they hit it over the wall. The momentum never left the jubilant dugout from that moment on.

“It was fun to see,” LHS head coach Brad Stoll said. “It was fun to watch them play. A lot of the balls in the infield were a credit to them coming out of the box hot with hard 90s and putting pressure on the defense.”

Lawrence’s offense got things rolling in the seventh, as 10 different batters went to the dish.

Cummins came through with an RBI single, and Vasquez recorded an RBI double to stretch the lead to five runs. Harris then notched another run with a single to left. Caleb Mondi scored another run on a fielder’s choice. Senior Colby Stumma tallied a sacrifice fly, which was one of two outs recorded by Blue Valley West in the fifth.

Neal finished things off with a two-run single to center for good measure.

“It feels great. This team surprises me every single time,” Vasquez said. “Their competitive nature, the energy in the dugout and everything. It is just crazy.”

Six players registered at least one hit for the Lions. Vasquez tallied three hits and finished with three RBIs. Neal netted two knocks, including a double.

“To put up 11 runs off 11 hits off a staff like that is as impressive as I’ve seen,” Stoll said. “Hitting is contagious, and tonight was an example of that. From the get-go, we were having some good at-bats.”