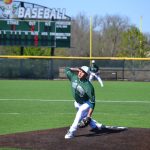 Just before the bottom of the third inning, the Free State baseball team huddled near the dugout.

After giving up a run in the top of the third, the Firebirds faced an early deficit. Head coach Mike Hill had a message for his team, challenging a squad that hasn’t lost since March 16. And the message worked.

Free State scored six runs in the home half of the third en route to a 6-2 win over Sioux Falls Lincoln (S.D.) Friday night at FSHS during the River City Festival. The Firebirds have now won 12 games in a row.

“Coach just called us in and said, ‘Good teams are going to get beat but great teams don’t,'” senior Peyton Sparks said. “We took that to heart and started playing like we have been, and it helped out a lot.”

But that’s what was so unique about the third-inning response. Free State (12-2) hasn’t had to face much adversity during its 12-game win streak, relying on dominant pitching and timely hitting to stay in the win column since dropping the first contests of the season.

So when FSHS failed to score early, and then junior Camden Karlin gave up a run in the top of the third, Hill knew he had to check the pulse of his squad.

“We were just lackadaisical from an energy perspective,” Hill said. “We made a couple mental errors and should have scored a run. Those things happen from time to time. As a coach, you have to remind them of a few things. They responded well, we had a good half inning and then we faded offensively.”

Karlin began things off with a leadoff walk. After senior second baseman Creighton Cordova reached on a fielder’s choice, senior Jake Baker singled through the right side to put two runners on. Senior Jack Kallenberger was hit by a pitch to load the bases with one out.

It was enough to swing the momentum fully in Free State’s favor.

“I knew our offense was going to come through at some point. It was just a matter of when,” Karlin said. “We were selective at the plate, knowing our zone. First-pitch fastball, taking advantage of those.”

One night after Ethan Bradford tossed a no-hitter, Karlin spun seven innings of two-run ball. He scattered six hits, striking out seven batters and walking none. Karlin threw 71.6% of his 95 pitches for strikes.

Sparks, who recorded Free State’s only extra-base hit of the day, finished with one run and one hit to go along with two RBIs. As a team, Free State’s offense recorded five hits and was kept quiet aside from that one inning.

Yet, the Firebirds have still done enough to win 12 games in a row. They aren’t talking about the win streak, but rather focusing on the next day. That, of course, is a little easier to do during the 18th annual River City Festival when FSHS will face its third team in as many days.

“If we lose a game next week, it is not the end of the world,” Karlin said.

Free State will play host to Leavenworth at 11:15 a.m. Saturday at Hoglund Ballpark.