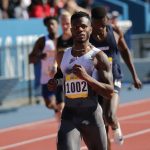 Kyle Clemons, a Kansas track and field alumni and US Olympic Gold Medalist finishes first in the 400 meter dash at the Kansas Relays, April 19, 2019 at Rock Chalk Park.

As he stood in front of the blocks, Kansas track and field alumnus Kyle Clemons crossed his heart and pointed up to the sky on the track at Rock Chalk Park.

Almost three years ago, Clemons did the same routine representing Team USA at Brazil’s Maracana Stadium. The stage was exponentially larger, but the Kansas Relays still have a leg up on Rio de Janeiro in Clemons’ eyes.

“Running for USA, you’re running for your country – it’s your whole country,” Clemons said. “(At Relays) I see people from when I was a freshman. They’ve been there through the whole process.”

Clemons, who ran in eight KU Relays, has only missed running in one year since his freshman season with the Jayhawks in 2010. Representing Adidas on Friday, Clemons took the fastest time in the field of the men’s 400 meter prelims at 47.00.

Kansas junior Callie Hicks, who took second in pole vault after clearing 12-foot-11.5, reiterated the spectacle of competing in front of a crowd of several thousand. Hicks, a Lawrence Free State alumna, competed in her fifth KU relays on Friday.

“This is a great event; a lot of people come out and watch,” Hicks said. “The stands are full of people, and you don’t get that very often in track.”

Hicks was joined at the podium by senior Alexis Romero, who cleared the next three bar heights to place first at 13-foot-10.5.

Freshman Rylee Anderson cleared 5-foot-8.75 in the high jump on her first attempt at the height and fourth overall for the day to win the event. Anderson is currently ranked No. 9 in the West region and No. 25 in the NCAA this season for the high jump.

Senior Shaylyn Stallbaumer took second in the women’s javelin with a 134-foot-7 throw. Stallbaumer advanced to the finals, but her mark on her second throw held up.

For the sprinters, Cordell Tinch, Cody Johnson and Darrius Releford each qualified in the 110 hurdles for Saturday. Morganne Mukes made her way to the finals in the 100-meter dash.

Junior Jedah Caldwell was the fastest collegiate runner in the 200-meter dash to automatically qualify for the finals with a time of 23.65. Mukes and Honour Finley joined her with qualifying times.

Caldwell, Eubanks, Nicole Montgomery and Chloe Akin-Otiko went on to post the fastest overall time in the 4×400 meter relay at 3:41.15. Kansas’s men’s 4×400 meter team of Marcus Davis, Ethan Fogle, Johnson and Releford also won their heat to advance with a time of 3:12.38.

The collegiate events will continue at 10 a.m. Saturday at Rock Chalk Park.

After not scoring in the series opener, the Kansas baseball team found its rhythm at the plate and won its first ...

The Kansas softball team did not score a single run in two games against a pair of ranked opponents on Friday ...

On a cold opening day in Nashville, Tenn., Kansas dropped the season opener to the Belmont Bruins, 6-0, at E.S. ...