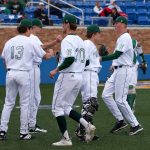 It was only fitting that Free State senior Ethan Bradford had to make the last out.

The ball bounced back to Bradford, who fielded it with ease. He tossed the ball to first base and walked toward the rest of his team with a stoic expression on his face. It was not the anticipated reaction, given what he just accomplished.

Bradford thought he just made a routine play to finish off a 1-0 win over Jefferson City (Mo.) during the 18th annual River City Festival Thursday night at Hoglund Ballpark. It wasn’t until junior catcher Camden Karlin met him along the first baseline that Bradford discovered the significance of his performance.

The talented lefty had just tossed the first no-hitter of his career.

“I didn’t know the whole game until everyone came on top of me and said ‘no-no,'” Bradford said. “I did not think I could do that, and it is crazy to think that I did.”

But not knowing what he was doing may have been the very thing that helped Bradford get the job done.

Bradford, a Nebraska signee, actually had a no-hit performance through six frames in his last start against Olathe North on April 4. In that outing, Bradford was thinking about it when he headed out to the seventh frame, and eventually fell just shy of the monumental feat.

This time around, Bradford was not thinking about the no-hitter because he had no idea. And that’s a credit to how much he dominated the Jays to help the Firebirds win their 11th game in a row. His fastball was hitting the mid 80s, and he had complete control of his changeup and curveball after the first few frames.

“Ethan is a hyper-competitive kid that hates to get beat, which is the No. 1 quality you look for in any kid,” FSHS head coach Mike Hill said. “He just competed today.” 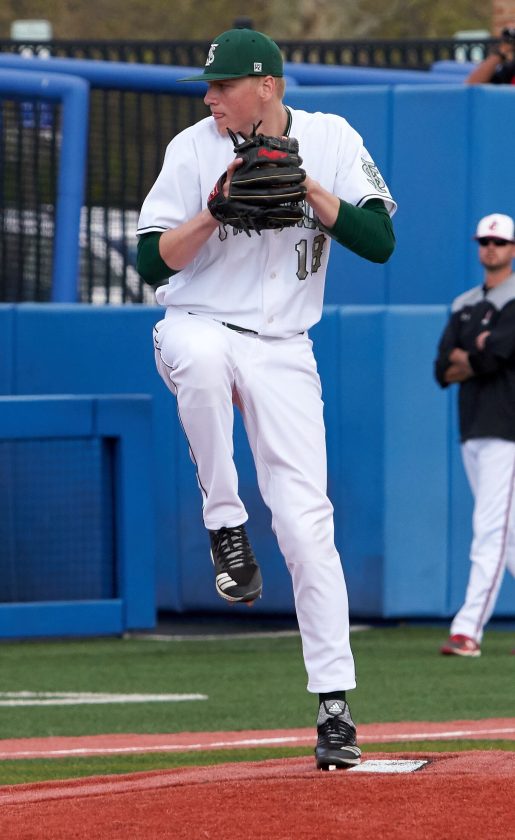 Free State senior Ethan Bradford throws a pitch during a game against Jefferson City (Mo.) Thursday night at Hoglund Ballpark on April 18, 2019. Bradford tossed his first no-hitter to lead FSHS to an 1-0 win during the 18th annual River City Festival.

However, Bradford wasn’t overwhelming from the start. The first Jefferson City batter lined out sharply to senior Jaxson Webb in center on the very first pitch of the game. Senior third baseman Peyton Sparks and junior shortstop Colter Maldonado then each handled ground balls to complete the first inning.

The second inning was much of the same. Senior first baseman Jake Baker caught a lineout, and Bradford faced the minimum. Bradford walked the first batter in the top of the third before whiffing the next two Jefferson City foes to notch his first two strikeouts.

Bradford only allowed one more baserunner all night, which occurred in the seventh frame. He whiffed eight guys, tossing 67% of his 91 pitches for strikes.

“I just stayed locked in and tried to keep the ball down with my release point,” Bradford said.

Free State (11-2) provided just enough offense to get the job done. Senior Creighton Cordova began the sixth with a single. Baker followed suit with a base knock, allowing Cordova to advance to third. Maldonado drove in the game’s only run with a sacrifice fly to left.

“When he’s throwing like that, it is pretty easy to catch,” Karlin said. “We knew if we gave him one run, he would finish it off for us.” 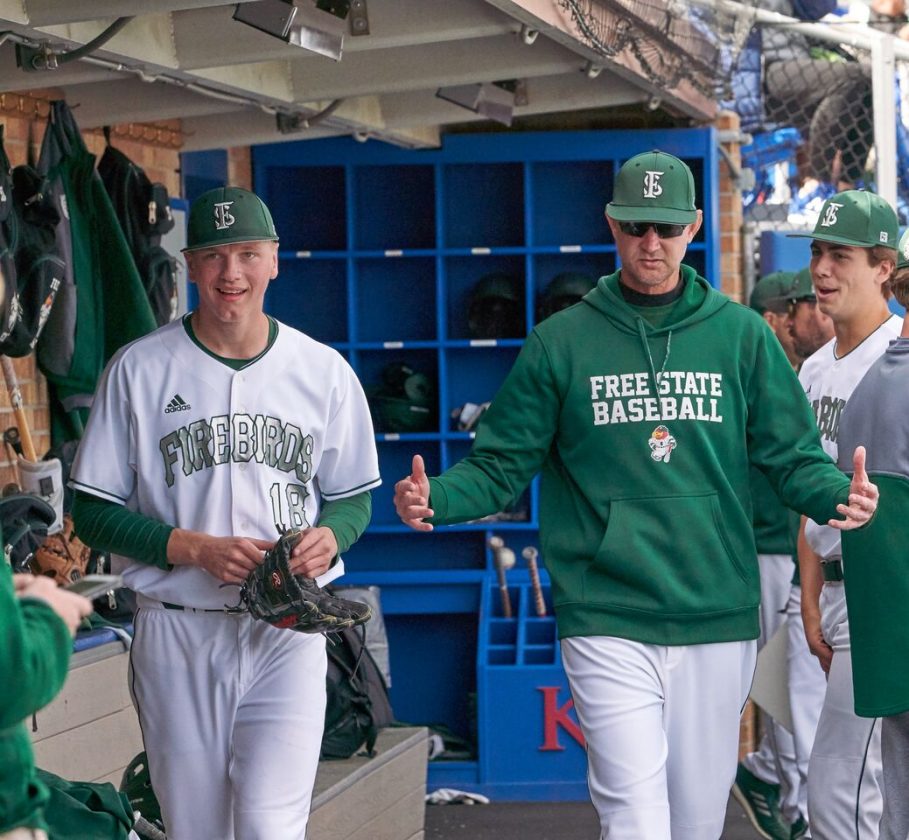 Yet that’s been the story of Free State’s 11-game win streak. The pitching has been dominant, while the offense has come through with timely hits to keep things rolling.

Bradford has pitched in eight games, including three starts, during this run by the Firebirds. He’s allowed three runs off eight hits over 32 combined innings. Free State’s pitching staff has surrendered two runs or fewer in 11 consecutive contests.

As a result, Bradford knows he will be handing the ball off to a very capable hurler during the second game of the River City Festival. Free State plays host to Sioux Falls Lincoln at 3:45 p.m. Friday.

“The whole team is just playing better each game,” Bradford said. “We are staying locked in during practice and coming out to compete in every game.”