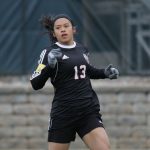 LHS senior forward Anna Chieu (13) chases down a ball during a game against Olathe North, April 11, 2019.

Senior Anna Chieu could thrive in any position on the field for the Lawrence High girls soccer team.

Ever since she joined the program as a freshman, Chieu has been one of the most-gifted players for the Lions. For the last two years, Chieu has played center midfielder for LHS. This season, though, she shifted to target forward and became the focal point of the offensive attack.

“She came in as a natural leader, just because she was so skilled as a freshman,” LHS coach Matthew McCune said. “She’s gone through some injuries, so she’s learned how to play different spots. She always wanted to be target forward.”

It didn’t take long for Chieu to show why she’s always wanted to make the position switch, as she scored a career-best five goals in a single match during a 6-3 win over Gardner-Edgerton on April 4. It was one more than any LHS player had ever scored in a game under McCune, who is in his fourth season at the helm.

The Lions changed their formation this year, which allowed Chieu to switch positions after earning a second-team All-Sunflower League selection last year as a midfielder. LHS also has plenty of young midfielders that can possess the ball by stringing passes together.

Chieu, who has been playing soccer since the second grade, already has inked her national letter of intent to play at the collegiate level for Baker University. She is willing to play forward or midfielder for the Wildcats, though she certainly has a preference.

Chieu has demonstrated the ability to find the back of the net ever since she joined the Lions. But her work ethic and confidence has grown over the last few years, which has helped her get to the collegiate level.

“I have learned to work hard for the team,” Chieu said. “We all work hard and play with heart, and that’s all that matters sometimes.”

Chieu hopes to help the Lions post a winning record in her final campaign. Whether LHS is able to accomplish that or not, though, Chieu has certainly left her mark on the program.

“She’s just a tremendous leader, and a great example for the rest of the players,” McCune said. “At the end of the year, it is going to be hard to watch her go because she’s one that you can’t replace.”