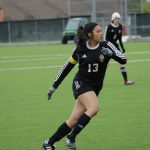 LHS senior forward Anna Chieu (13) chases down a ball during a game against Olathe North on Thursday, April 11, 2019.

After a back-and-forth battle, the Lawrence High girls soccer team dropped a 2-1 decision at home to Olathe North Thursday night.

It was a hard-fought loss by the Lions, who fell to 2-4 after their second consecutive defeat. With senior captain Leslie Ostronic out, LHS shifted its lineup around and played three freshmen in key roles.

Freshman Avery Kingery netted the lone score for the Lions, which served as the equalizer. Sophomore Marley Sears was credited with the assist on the score. Olathe North answered with the game-winning goal with 12 minutes remaining after notching the first score 10 minutes into the contest.

The Firebirds (9-2) have now won nine games in a row after dropping their first two games of the season in Missouri. Free State scored two runs in the second and five more in the third. FSHS added one run in the fourth and two more in the fifth for the run-rule victory.

The Firebirds collected 10 hits in the win, while holding the opposition to just two hits. Sophomore Tatum Clopton, an Oklahoma State commit, was the winning pitcher after recording 15 strikeouts.

In the second game, Lawrence had a chance to tie the game in the sixth with two runs on and down by two runs. Johnson registered a triple, while Harjo produced a double. Victoria Droge scored two runs and recorded three base knocks.

Senior Sawyer Nickel led the Firebirds with a first-place finish in the No. 1 singles bracket, going 3-0 on the day. Senior Danny Sola posted a 3-0 record to take first in the No. 3 singles bracket. Henry Six and Ben Melvin, Free State’s No. 2 doubles team, posted a 2-1 clip to take second place.

Free State will compete in the Plaza Tournament Wednesday.