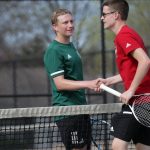 Sawyer Nickel is used to people knowing his name at local tennis meets.

The Free State senior only dropped one game among his three matches, which came against Bishop Seabury junior Grayson Rader, en route to a first-place finish in singles play of the City Series on Tuesday. Rader was the only city foe to win a game against Nickel, as he won in straight sets over both Aiden Van Fleet and Drew Dean of Lawrence.

“I was telling (Grayson) after the match (that) I thought he took tremendous strides from last year,” Nickel said. “The score may not show it, but he got better. It kind of moves me because I always deem myself as the best high school player in Lawrence so that’s what makes me competitive out here in tournaments like this.”

Free State’s doubles pair of Trey Melvin and Davis Steadman won the doubles bracket with a win over Kanak Masten and Cooper Wright of LHS. They scored the last of 26 team points on the day for Free State, claiming the team title in the City Series. Lawrence scored 21, and Seabury scored 18.

Reaching the semifinals with a 8-1 win over Seabury’s Peter Westbrooke, Dean went on to take third place with an 8-4 win over Free State’s Henry Six.

“(Sawyer) is the top that is at least still close, like ‘that’s reasonable.’ It’s not like (Roger) Federer who’s so far out there that you can’t relate,” Dean said of Nickel. “He really pushes you to play your best, you can’t just dink the ball over and be like ‘Yeah, I’m just going to make it in every shot.’ You really have to hit the ball back for a chance.”

The Lions scored their most points in the doubles bracket with the pair of Ryan Logan and Cuyler Dunn taking third place with an 8-4 win over Free State’s doubles pair of Ben Melvin and Daniel Sola. Masten and Wright scored seven, as they took second place.

The Seahawks had two pairs earn a win on the day in the doubles draw. Ian Hanna and Diego Klish picked up an 8-4 win over an LHS team. They lost to teammates Shea Hanna and Ben Shumaker 8-4 in the fifth place game. Rader was the highest to place for the Seahawks.

“I am so hyped for our team,” Rader said. “Bishop Seabury had nothing when I first came here. I was our first player to go to state. It’s been three years now, and we could win state.”

Free State travels to Olathe for a quad against Olathe Northwest and Olathe South Thursday, and LHS will play host to Junction City, Olathe South and Gardner Edgerton in its home quad on April 17.