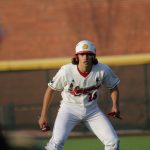 Lawrence shortstop Carlos Vasquez leads off of first base during a game against Shawnee Mission South on April 5, 2019, at LHS. The Lions won 6-2.

The Lawrence High baseball team pulled ahead after being tied at two runs to outwork Shawnee Mission South in a 6-2 win Friday night at LHS.

The Lions (4-4, 2-3 Sunflower League) scored two early runs through their first three at-bats, reaching base on a passed ball and a fielding error. Devin Neal stole home to put the Lions on the board, and Carlos Vasquez hit a fly ball to left to send Payton Cummins home as well.

After a rough debut in Wichita, Aidan Bannister started the game with a trip through the order without allowing a hit. He broke the streak in the fourth inning with two outs. Bannister hit two batters and gave up a single to load up the bases, which put Tanner Thurlow in place to tie the game on a two-run double.

Chris Ritter came in relief to finish the fourth frame, and did not allow a hit in the final three innings to earn the win from the bullpen.

“We’ve been looking forward to getting (Aidan) back on the mound and he did a great job,” LHS coach Brad Stoll said. “He threw a lot of strikes, he commanded his breaking ball, which was great. He just lost a little command, hit a couple of guys and (Thurlow) hit an absolute missile, he made him pay for it.” 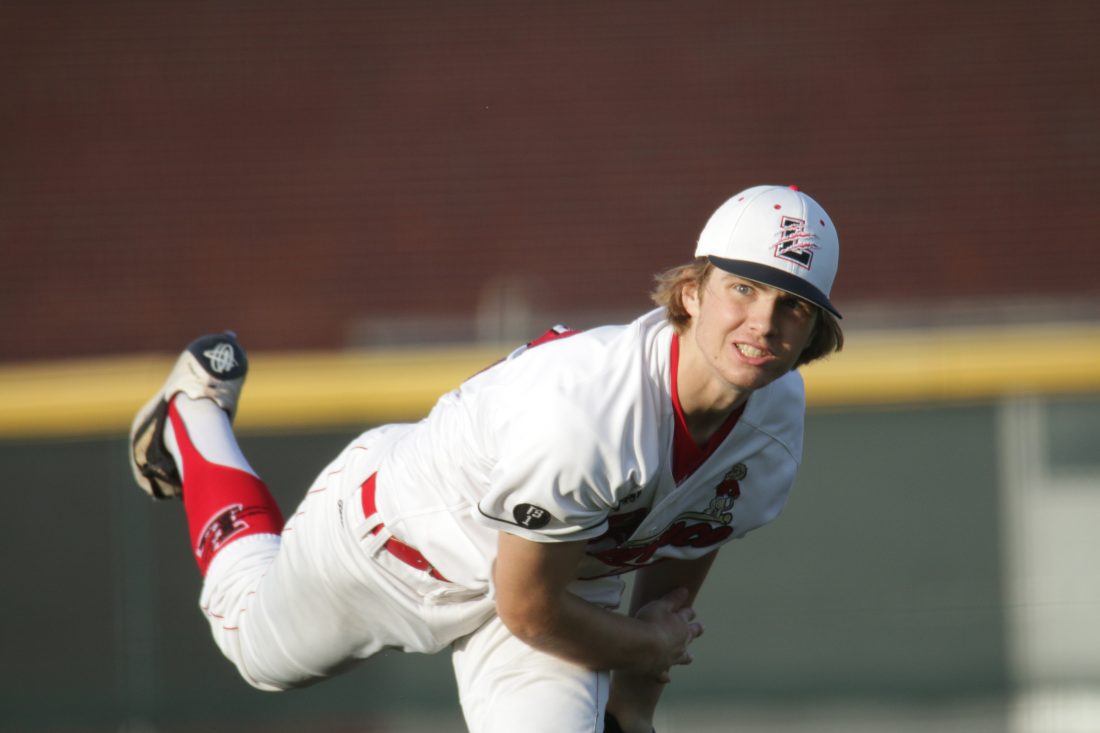 Lawrence pitcher Aidan Bannister throws a pitch in the fourth inning of a game against Shawnee Mission South on April 5, 2019 at LHS.

Senior Caleb Mondi scored the go-ahead run on a failed pickoff attempt at third, stealing home. It was the start of a three-run inning for the Lions, as Vasquez sent home Neal and Cummins to put the Lions up three.

“I just got on base and we really practice baserunning a lot,” Mondi said. “I did my best to get to third, once I got (to) third they messed up a little bit and I stole home.”

Shawnee Mission South (1-4, 1-3) finished the game with three errors, and only picked off the Lions on one of their nine steal attempts. Neal, Cummins and Cole Mondi each stole two bases, and Ryan Lauts stole one as well.

Vasquez went 3-for-3 on the day with three RBIs, and Preston Harris reached base twice with a two-hit day.

“We saw some things we can take advantage of and they did an excellent job,” Stoll said. “With Caleb, that ball didn’t skip too far away from the third baseman but he’s super aggressive. I never question how hard he’s going to play, he’s always locked in and a very heads-up player.”

Neal hit a solo shot to center to lead off the sixth frame to give the Lions an insurance run and Jackson Hewins reached on a fielder’s choice as a pinch hitter.

“I think they get more relaxed when you’re ahead, you feel like you’re going to get more fastballs,” Stoll said. “(Devin) just missed a few, and he’s an incredibly talented young man. His future in this game, I am really excited to watch him play, I am really glad he’s just a sophomore. He’s a very dynamic young man, he’s a hard worker and that ball was a bomb.”

The Lions will play host to Shawnee Mission North on Tuesday.