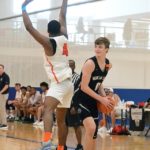 Blue Valley Northwest senior Christian Braun, who orally committed to KU on Monday, Sept. 17, 2018, is shown here during an AAU event in Lawrence this summer with MOKAN Elite.

When it comes to the 100-plus year history of Kansas basketball, finding good KU-Missouri stories is easy to do.

For decades until its end in 2012, the Border War matchup was one of the most anticipated games of the season, no matter how each team was doing in the win/loss column. And KU and MU are responsible for some of the most intense and memorable games in the history of both programs.

But would you believe that today, more than six years after the two teams played a game that actually counted, things are happening that are adding to the storied Border War history?

Sure, the two programs got together for an exhibition game last season to raise money for hurricane relief. And, yeah, there was that alumni scrimmage this summer that drew a fair amount of attention and featured a few former greats from both schools.

But this week, when Blue Valley Northwest senior Christian Braun announced his commitment to Kansas, the KU-MU rivalry received new life, even if only in the form of daydreaming about what one day might happen.

With Christian coming to KU and his older brother, Parker, entrenched as a freshman walk-on at Mizzou, both players would be lying if they told you they had not talked about one day facing each other with the Border War on the line again.

“Me and Parker were talking about it,” Braun told the Journal-World Monday night, shortly after he made his commitment to KU official. “Obviously, I love playing against him, I love playing with him, but he was happy for me going to KU. But I would love to play him.”

Despite their sibling bond, Christian and Parker are, in many ways, different on the court. For starters, they play different positions. Beyond that, the two vary in physical appearance, as well, with the older Parker favoring long hair and even becoming known for his man-bun look during his high school days and Christian often being mistaken for a much younger player with a baby face and more traditional haircut.

“So I tried that a few years back,” he joked of the long-hair look. “Not to that extent, but I tried that. It just didn’t work out for me. Wasn’t really my thing. So I cut it off. That’s his thing.”

Neither Braun — Christian at 6-5 and still growing and Parker at 6-9 and possibly still growing, too — is counting on the KU-MU showdown coming back during their time on the court. But the clock has officially begun on hoping for it to happen, largely because both KU and MU play such an important part in their family history.

“Yeah, it’s been pretty fun,” Christian said of the KU-MU banter among his family. “But the KU-MU thing, in my family, goes back pretty far.”

His mother, Lisa Sandbothe and aunt, Lori Sandbothe, played for the Tigers in the late 1980s and were both standouts in the program and in the state. Before heading off to Mizzou, each won the Miss Show-Me Basketball honor (Lisa in 1987 and Lori a year earlier), given annually to the top prep female player in Missouri.

And Lisa went on to play professional ball in one of the upstart women’s leagues that came before the WNBA.

On the men’s side of the family, Braun’s uncle, Mike Sandbothe, also played basketball for the Tigers and his father, Donald Braun, now a doctor, briefly walked on to the Kansas men’s basketball team during his days at KU.

Needless to say, Braun, who grew up a Kansas fan — first in Burlington (hometown of former KU guard Tyrel Reed) and late in Overland Park for high school — said his family now supports both sides in the Border War.

He doesn’t know exactly how they all feel about the rivalry being restored, but does know that he would love to see it happen while him and Parker could face each other.

Both for the opportunity to take on the Tigers and to represent his home state.

“I think everybody from Kansas has that as a goal,” he said of playing at KU. “Just being an in-state kid and taking pride in where you’re from.”

One of Braun’s friend’s, who currently is living out that dream, is KU freshman, Ochai Agbaji, who played with Braun in the MOKAN program before coming to Kansas.

Braun said the two have talked a lot about basketball and college over the years and added that Agbaji, who hails from Kansas City, Mo., reached out to him on Monday after hearing about his commitment.

With his recruitment now behind him, Braun said he was looking forward to getting ready for his KU career and to trying to track down another state title at Blue Valley Northwest before his prep days are finished.

“Now that I’m committed, it’s just time to get better and prepare so I’m as ready as I can be when I get there,” Braun said. “That’s kind of the focus. Hopefully (I’ll) get another state title. That’s another goal of mine. But I’m just excited to prepare and be as ready as I can when I get to campus.”