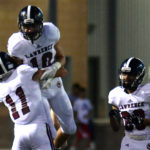 photo by: Kevin Anderson/Special to the Journal-World

In fact, Mondi didn’t even play on the defensive side of the ball until the 2017 season. Mondi, who has been playing football since the third grade, only really knew how to play receiver prior to making the switch.

One year after flipping sides, Mondi is the team’s best defensive player and has shown the potential to play linebacker at the next level.

But it wasn’t always a seamless transition for Mondi when he was asked to change positions.

As a junior, Mondi admitted that he played scared at linebacker. After playing receiver all his life, Mondi wasn’t really used to dealing with that much contact. The Lions allowed an average of 32.4 points per game in 2017, a year in which they posted a 5-5 record.

“It was crazy,” Mondi said. “I didn’t really know what to do. I had to ask the older guys what I was supposed to be doing. Coaches were getting in my face for getting everything wrong.”

This season, however, the defense is considered the strength of the team, and Mondi is a big reason why. He gained about 20 pounds of muscle and is constantly making plays all over the field.

Mondi has put in the work in the offseason to have his best year yet. He’s considered the hardest worker in practice, serving as an example for younger players in a new system. In addition, Mondi is one of six captains for LHS this year.

It’s a role that Mondi has embraced completely in his final season at the high school level.

“It’s a real honor,” Mondi said. “All of our young guys come up and ask me about stuff they don’t know and what we are going to do. It’s a big leadership responsibility, but I definitely feel that I play the right part.”

Senior outside linebacker key for Firebirds

Entering the 2017 season, Free State coach Bob Lisher decided to play as few players on both sides of the ball as possible.

As a result, Matt Georgie was left with a decision to continue playing on offense or defense only. Georgie, who saw action as a running back his sophomore season, ultimately elected to focus on his linebacker duties for the Firebirds.

In his second year as just a linebacker, Georgie has played a key part in the Free State defense, which has held the opposition scoreless through the first two games.

The Firebirds (2-0) have started the season with a pair of victories, both of which have been by a 41-0 margin.

In both contests, Free State has made key stops late to preserve the shutout with some of its reserves. Still, it is evident how dominant this defense is with its starting unit during the first half of both outings.

“We are definitely moving faster because we are not as big,” Georgie said. “We just fly to the ball. We have been taught that for two years now.”

Georgie admitted he feels more comfortable at his outside linebacker position this year, as well.

After moving to one side of the ball, Georgie noted that he felt more impactful on the defensive end with fresh legs. Only three players actually played both sides of the ball, which has helped the defense play more aggressively.

“I just like hitting people,” Georgie said. “It’s a lot more fun, and I don’t have to worry about who I’m going to block the next play. Whoever has the ball, I just have to hit.”

A pair of area teams will square off this week, as both programs are still searching for that first win of the 2018 season.

Tonganoxie (0-2) has scored 13 points through the first two games, while Eudora (0-2) has recorded just seven points. Junior Cooper Cunningham has recorded 102 rushing yards for the Chieftains, while senior back Carter Neis has racked up over 100 yards on the ground to lead the way for the Cardinals.

Baldwin will look to rebound from a 51-7 defeat against KC Piper in another road battle.

The Bulldogs (1-1) won their first game away from home, claiming a 35-7 victory over Ottawa in the season opener. Louisburg enters the matchup with a perfect 2-0 record after knocking off Spring Hill and Tonganoxie.

Perry-Lecompton has rolled past its first two opponents, outscoring the opposition by a 114-0 margin through the first two weeks.

The Kaws will be tested this week, though, with a road test against defending state champ Sabetha, which is ranked No. 2 in Class 3A according to Kpreps. Perry-Lecompton, the No. 5 team in Class 3A, will lean on senior quarterback Dalton Kellum, who has over 500 total yards, in an attempt to pull off the upset.

Sabetha has won the last three meetings between these two teams. Perry-Lecompton (2-0) travels to Sabetha (2-0) at 7 p.m. Friday.

For the first time in two weeks, Veritas will play a football game.

It will be the first home game of the season, as Veritas welcomes in Manhattan CHIEF. The Eagles have dropped both contests this season, falling to Albany in the season opener before suffering a lopsided defeat against Wichita Homeschool.