LHS volleyball advances to 6A semifinals 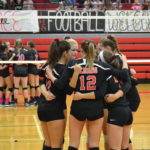 Lawrence High and Free State volleyball starters huddle up before the City Showdown at LHS on Oct. 2, 2018.

The Lawrence High volleyball team is going to play on the final day of the season.

The Lions, who are ranked No. 1 in Class 6A, did not drop a set in pool play. They have dropped just eight of their 85 sets this season behind a nine-person senior class. Last season, LHS went 1-2 in pool play before being eliminated on the opening day of the 6A state tournament.

Lawrence will face Washburn Rural at 10 a.m. Saturday for the semifinals. With a win, LHS would face the winner between Olathe Northwest and Blue Valley in the championship. Olathe Northwest has won the previous two state titles in Class 6A.