Derby eliminates Lawrence High in 1st round of football playoffs 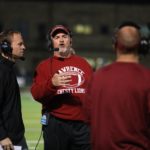 DERBY — Even under the best of circumstances, the cards were stacked against the Lawrence High football team.

Derby, the No. 1 team in Class 6A, stormed over every opponent this regular season and appears poised to make a fourth consecutive trip to the state championship. LHS, meanwhile, has had to rely on several sophomores due to an injury-plagued season en route to earning the 16th seed in the 6A West playoff bracket.

As a result, the Panthers took care of business during a 41-7 victory over the Lions Friday at Panther Stadium in the first round of the postseason.

“I just told them to leave themselves on the field over the last two quarters,” head coach Steve Rampy said. “(Derby) is the best team in Kansas. We played hard in the second half, they were just better. They are the only team we lined up against that was just different.”

For the third consecutive week, Lawrence (1-8) squared off against a ranked team.

This time, though, the Lions were forced to do it without sophomore quarterback Tre’ Jackson, who had sparked the offense since taking over starting duties in the third week of the regular season.

Sophomore Jackson Dooley and senior Garrett Romero, the team’s starting quarterback in the first two weeks, filled in for Jackson against a stout Derby defense. LHS punted nine times during a first half, which featured just one first down.

“They were in so far over their head,” Rampy said. “Jackson was scared to death and rightfully so. We have to learn from it.”

On the other end, the Panthers (9-0) scored all 41 of their points in the first half to remove any doubt about their first-round result.

Derby quarterback Hunter Igo tossed a pair of touchdown passes to junior receiver Jacob Karsak within the first four minutes of the contest. Igo, who did not play for much of the second half, ended up with 177 passing yards on a 10-for-11 effort through the air.

Junior running back Tre Washington delivered a 22-yard rushing touchdown on Derby’s fourth possession to give the hosts a 21-0 advantage.

However, the Lions managed to force the Panthers into five turnovers in the loss. Senior Sam Bart and sophomore Kallun Chitama each registered an interception. Chitama tallied a fumble recovery, while LHS senior Marquis Jones also recovered a fumble on a punt return.

“They always play hard,” Rampy said. “There is no quit in them. That is an important quality to have.”

Still, the Panthers’ offensive unit proved to be too much for the youthful Lions.

Yet the experience, particularly over the last few weeks, could be beneficial for LHS down the road. Despite a younger roster, Lawrence played close with Olathe North and Free State over the final two outings of the regular season.

Dooley connected with junior receiver Chris McGee for a 32-yard touchdown pass to avoid a shutout against the Panthers, who have won two of the last three state titles. At the very least, the opposition set the standard for what the Lions are trying to accomplish.

“That’s the bar,” Rampy said. “What Derby looks like is what we are trying to make our guys look like in the next couple of years.”